India has made momentous progress in reducing multidimensional poverty, says Multidimensional Poverty Index by UNDP and the Oxford Poverty and Human Development Initiative.

India has made momentous progress in reducing multidimensional poverty, according to Multidimensional Poverty Index (MPI) by UNDP and the Oxford Poverty and Human Development Initiative at the University of Oxford.  The report which was published recently said the incidence of MPI was almost halved between 2005/6 and 2015/16, climbing down to 27.5%. It also said, within ten years, the number of poor people in India fell by more than 271 million and called the development a 'truly massive gain'.

To catalyze progress in measuring the "eradicating poverty in all its forms and dimensions" as part of the 2030 Agenda, according to Abdoulaye Mar Dieye Assistant Secretary-General, Director, Bureau for Policy and Programme Support, UNDP, "the United Nations Development Programme (UNDP) and the Oxford Poverty and Human Development Initiative (OPHI) at the University of Oxford have reinvigorated their collaboration to develop a new version of the global Multidimensional Poverty Index (MPI)".

This collaboration started in 2010 when the first global MPI was published in the Human Development Report (HDR).

"Multidimensional poverty considers the many overlapping deprivations that poor people experience. Explaining their disadvantages, people living in poverty regularly describe lack of education, poor health and nutrition, ramshackle housing, unsafe water and so on," says the report published by OPHI.

The report says 1.3 billion people live in multidimensional poverty in the 105 developing countries for which the 2018 global MPI is estimated. For the 2018 global MPI, 5 of the 10 indicators have been revised jointly by OPHI and UNDP to align the MPI with the 2030 Agenda.

"This represents 23.5% - nearly a quarter of the population of the 105 countries for which the 2018 MPI is calculated. These people are being left behind in multiple ways. They are deprived in at least one-third of overlapping deprivations in health, education, and living standards, lacking such things as clean water, sanitation, adequate nutrition, or primary education," says the report.

According to the study, about 612 million people 46% of those who are multidimensionally poor - live in severe poverty, that is, they are deprived in at least half of the weighted indicators in health, education, and living standards.

The 2018 #MultidimensionalPovertyIndex paints a comprehensive view of the many ways in which 1.3 billion people worldwide experience poverty in their daily life, while showing that progress is possible. More at https://t.co/AKtckZ3WAx #LNOB pic.twitter.com/3MRr97WVDo

India's scale of multidimensional poverty reduction over the decade from 2005/6 to 2015/16 -- from 635 million poor persons to 364 million -- brings to mind the speedy pace of China's poverty reduction, which occurred over more than 20 years, says the report.

Poverty among children fallen the fastest

"If one considers the 364 million people who are MPI poor in 2015/16, 156 million (34.6%) are children. In fact, of all the poor people in India, just over one in four - 27.1% - has not yet celebrated their tenth birthday. The good news is that multidimensional poverty among children under 10 has fallen the fastest," says the report. 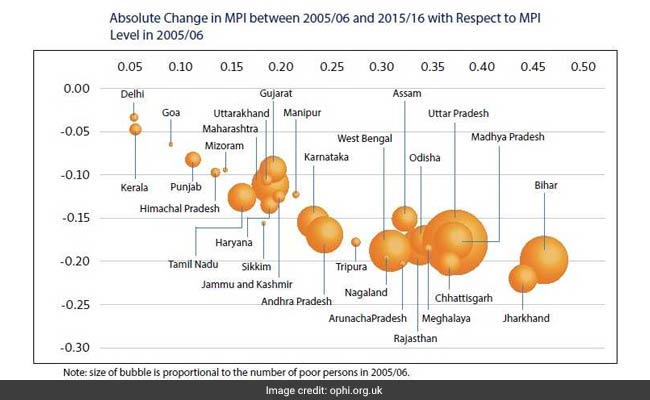 In 2005/6 there were 292 million poor children in India, so the latest figures represent a 47% decrease or a 136 million fewer children growing up in multidimensional poverty. When considering the durable and lifetime consequences of childhood deprivation, particularly in nutrition and schooling, this is a tremendously good sign for India's future.

Half of the world's poor are children according to new 2018 #MultiDimensionalPovertyIndex from @UNDP & @ophi_oxford. The index provides the most comprehensive view of the many ways in which 1.3B ppl worldwide experience poverty in their daily life. #UNGAhttps://t.co/8tfcEeLMMj

According to the Oxford report, traditionally disadvantaged subgroups such as rural dwellers, lower castes and tribes, Muslims, and young children are still the poorest in 2015/16.

For example, the report argues that, half of the people belonging to any of the Scheduled Tribes communities are MPI poor, whereas only 15% of the higher castes are. Every third Muslim is multidimensionally poor, compared to every sixth Christian. Two in five children under 10 years of age are poor (41%), but less than one quarter of people aged 18 to 60 (24%) are.

Among states, Jharkhand had the greatest improvement, with Arunachal Pradesh, Bihar, Chhattisgarh, and Nagaland only slightly behind. However, Bihar is still the poorest state in 2015/16, with more than half of its population in poverty. In 2015/16, the four poorest states - Bihar, Jharkhand, Uttar Pradesh, and Madhya Pradesh - were still home to 196 million MPI poor people - over half of all the MPI poor people in India. 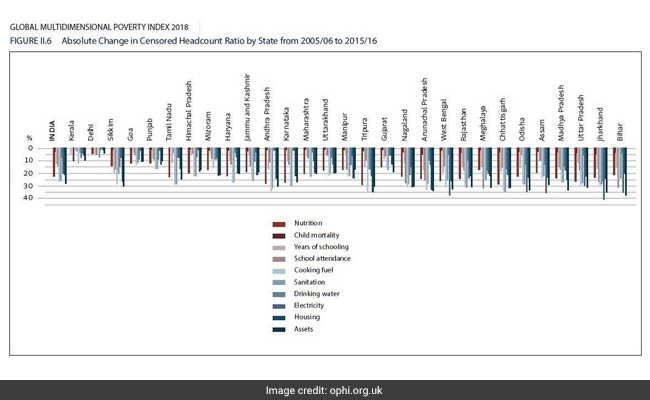 For the 2018 global MPI, five of the ten indicators (Nutrition, Child mortality, Years of schooling, School attendance, Cooking fuel, Sanitation, Drinking water, Electricity, Housing and Assets) have been revised jointly by OPHI and UNDP to align the MPI with the 2030 Agenda.

The 2018 global MPI is an internationally comparable measure of acute poverty for 105 countries, covering 5.7 billion people (approximately 75% of the global population).

VITEEE 2020 Cancelled, Admission On The Basis Of Class 12 Marks

ICSE, ISC Result 2020: How To Apply For Recheck