Virali Modi, 28, a US-based disability rights activist, was travelling from Delhi to Mumbai when the alleged incident took place. 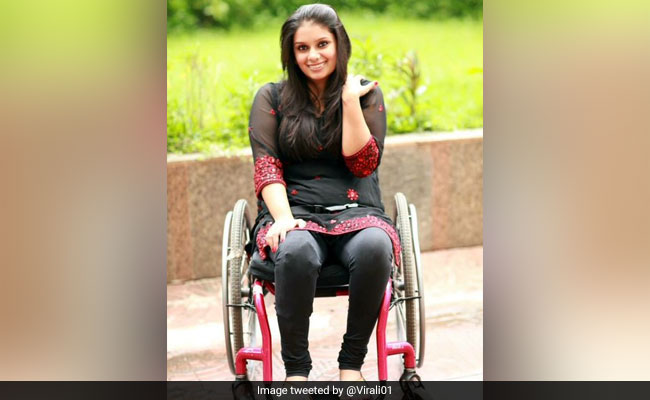 A US national with disability has said a security personnel at the Delhi airport asked her to stand up from her wheelchair for security check despite her declaring that she can't stand due to a spinal injury she suffered in 2006. "She went to call her senior and started saying that I was acting and doing drama," the woman said in an email to the Central Industrial Security Force (CISF) chief.

Virali Modi, 28, a US-based disability rights activist, was travelling from Delhi to Mumbai when the alleged incident took place.

"Because of my disability I carry a personal wheelchair which I had surrendered to the check-in counter as cargo. I was appointed a porter to help me to my seat on the flight. Upon reaching the security checking, I had the worst experience with one of your female CISF (officer)," she said in a tweet and attached a screenshot of her complaint to the CISF chief.

"She started forcing me to stand up, even though the porter and I told her multiple times that I could not stand. She refused to do my checking," Ms Modi added in the complaint.

"YOU HAVE TO STAND UP FOR SECURITY CHECKING! STOP DOING DRAMA!," - The CISF at Delhi airport said this to me. @jayantsinha@CISFHQrs@DelhiAirport@debolin_sen@BookLuster@guptasonali PLEASE RT - THIS TREATMENT TOWARDS THE DISABLED IS RIDICULOUS pic.twitter.com/WGYFULblUm

Ms Modi said she asked the officer to do a "manual pat down" as she couldn't stand.

"I even offered to show her my passport which proves that I travel internationally despite being a wheelchair user. She supposedly went to call her senior and started saying that I was acting and doing drama," Ms Modi alleged.

"When I contacted her she started yelling at me, denying what she said. I could not get her name because she was standing in such a way where I could not view her name tag. Finally a senior staff member came and she did a manual checking and let me go," she added.

Ms Modi later said that the "head of the CISF" expressed his regret over the incident.

"I received a call from the head of the CISF in Delhi who expressed his regret about this situation and extended an invitation to meet him whenever I am in Delhi. He also wants me to give a soft-skill lesson to the CISF once I'm there," Ms Modi said on Facebook.

"This of course does not resolve the situation, but it's a stepping stone towards inclusion and fair treatment of those with disabilities," she added.

Last year, Ms Modi had alleged that a CISF personnel had forcefully lifted her from her wheelchair at Mumbai Airport. The allegation was rejected by the central force.