Sangeeta Devi, 46, was among the two women and a teenager killed in the massive fire at the two-storeyed factory in the national capital's Jhilmil Industrial Area. 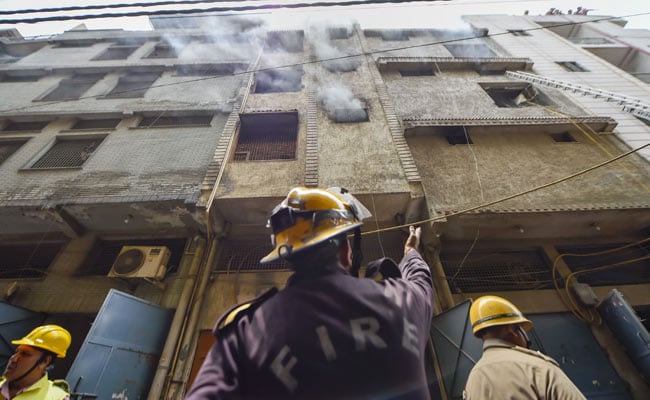 The fire started from the first floor of the building around 9 am and engulfed the whole structure.

Sangeeta Devi, who was killed in a fire at a factory in east Delhi, wanted to skip work on Saturday as she was unwell, but fearing she would lose two days of wages, she reluctantly decided to go, according to her son.

Sangeeta Devi, 46, was among the two women and a teenager killed in the massive fire at the two-storeyed factory in the national capital's Jhilmil Industrial Area.

"I coaxed her not to go to work but mother said if she skipped work on Saturday, according to the factory's rules, her salary for two days (Saturday as well as Sunday) would be deducted," Sangeeta Devi's 14-year-old son Sunny Kumar said.

Sangeeta Devi, a resident of Krishna Nagar and a native of Patna in Bihar, was responsible for packing products at the hardware factory in Shahdara and had migrated to Delhi 10 years ago.

She was working in the factory for the last nine years and earned Rs 10,000 a month, according to family members.

On Saturday, she was down with fever and cold. "Had my mother stayed back at home today she would have been alive," her son said.

Sunny Kumar, who was visiting his parents in Delhi, said his mother left for work around 8 am and at about 9 am, he got a call from a woman worker at the factory, informing him about the fire.

The blaze started from the first floor of the factory's building around 9 am and engulfed the whole structure, according to police.

Sangeeta Devi is survived by her husband and three children, who live in Bihar with their relatives. Her husband works at a nickel factory in Mandoli in Delhi.

"To save money and send it to her children in Bihar, she used to walk to the factory which is around six-seven kilometers from her house and saved around Rs 80 daily," Sangeeta Devi's neighbhour Anand Kumar said.

At the GTB Hospital, 17-year-old Suraj broke down as he waited for his mother Manju Devi's body.

Two to three months ago, he said, "my father was discharged from here, and today, I have come to the same hospital for my mother's body," he said.

His father was suffering from a liver infection and was admitted to the GTB hospital.

Manju Devi, 50, was working at the factory for the past 15 years and used to commute by local train, according to Suraj.

"Today morning, around 7.50 am, when she was leaving the house, I asked her for 100 rupees which I had to return to a person. Around 12 pm, my elder brother Manish, who works with my mother, called me and said our mother suffered injuries in a fire.

"It was later in the afternoon when we reached the hospital, we got to know she has died," he said.

Waiting in the crowd at the hospital for her son's body, Fatima Begum was inconsolable. She lost 19-year-old Shoaib in the factory fire.

"Last month, I had gifted my son a brand new phone and paying for it in installments. He was demanding it from me for the past many months," she said. Shoaib, a resident of Brahmpur area in Seelampur, had joined the factory last year.

His job was to prepare bills at the factory which was owned by four brothers --- Naeem, Wasim, Shanu and Adnan. "Wasim was married to a girl who was our neighbour and through him, Shoaib got the job," Shoaib's father Wahid Ali said.

"Around 1 pm, I got a call from Waseem's brother-in-law about the incident and was heading towards Jhilmil Industrial Area. When I reached Shahdara flyover, they informed me to go to GTB hospital," Wahid Ali said.

Shoaib was the only son of Wahid Ali and Fatima Begum. They have a daughter Fahiba, 18.

"Shoaib had gone to attend a marriage last night and returned home at around 10 pm. He left for the factory this morning and that was the last time I saw him," Fatima Begum said.