With Demands Of Loan Waiver, Minimum Wage, Farmers Hit The Road In Delhi

The farmers are demanding loan waivers and minimum support price for produce according to the Swaminathan Committee recommendations.

Parts of Delhi turned a sea of red today as thousands of farmers from across India hit the streets of the national capital to draw attention to what they say is an agrarian crisis in the country. The rally, organised by Left-leaning farmers' and workers' groups, is demanding reforms in key government policies on farmers' compensation, minimum wage and land rights.

Protesters came from all parts of the country -- from Kerala and Bengal to  Haryana -- to express their frustrations. Carrying red flags and shouting slogans against the policies of the Central government.

Their key demands included a minimum wage for Rs. 18,000 for all workers, implementation of re-distributive land reforms, retraction of labour law amendments and the implementation of minimum support price and a one-time farm loan waiver.

"If they don't deliver on promises, we will vote out the government in the semi-final in Rajasthan and Chhattisgarh, and then in 2019 as well," said Amara Ram, vice-president of the All India Kisan Sabha.

"Nothing makes a difference to the government. They just make promises," said another farmer. "We marched in Mumbai, took trains here, took so much trouble, when will the government understand?" 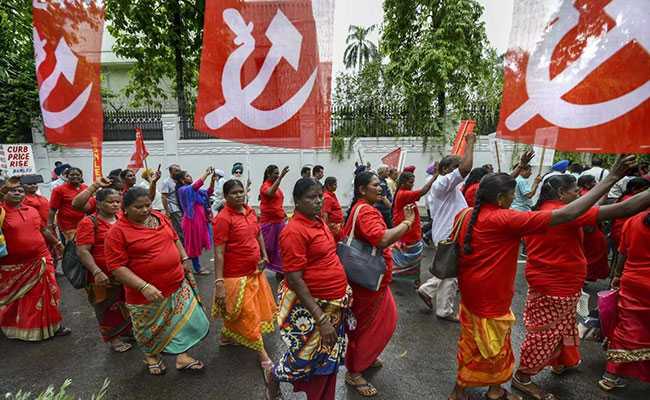 Other groups were demanding the implementation of re-distributive land reforms.

Other groups were demanding the implementation of re-distributive land reforms. "We don't have land. The land we work on in the forest, we should get it," said Arun Gaikwad, a farmer from Maharashtra.

The farmers' agitation gains momentum as Gujarat's Patidar leader Hardik Patel's hunger strike for their cause entered the 12th day. Mr Patel is demanding that all farm loans be waived by the government. His strike has received support from Delhi Chief Minister Arvind Kejriwal.

The march from Ramlila Maidan to central Delhi's Parliament Street led to a mass meeting where organizers from the Center for Indian Trade Unions (CITU) and the All India Kisan Sabha (AIKS) demanded that the government deliver on the promises it made in 2014.

The rally severely hit the traffic and the police had to announce multiple diversions and close roads through the capital.

"This is the biggest rally of the working people that Delhi has seen in decades. The entire 1 km stretch from Parliament Street police station to the outer circle of Connaught circus is full of people carrying Red Flags, so is the Tolstoy marg," the CPM tweeted from its official party handle.

The organisers said another massive rally is planned for November 15.