Union minister Vijay Goel took out a march on a bullock cart at 11:30 am from the Red Fort in Chandni Chowk against rising fuel prices in Delhi

A union minister has found a unique way to register his protest against the rising fuel prices in Delhi. With petrol prices skyrocketing to Rs 81.82 per litre and diesel to Rs 73.53 in the national capital today, the Bharatiya Janata Party minister Vijay Goel decided to ride a bullock cart.

Mr Goel took out a march on a bullock cart at 11:30 am from the Red Fort in Chandni Chowk, demanding the Arvind Kejriwal-led Delhi government reduce fuel prices.

His supporters were also seen holding placards and joining in the protest as the minister held the reins of the bullock and marched on.

"I took out a protest in Chandni Chowk demanding reduction in fuel prices by the state government. It's appalling that the AAP has not joined other states in doing so and it's a gross injustice to all Delhiites," Mr Goel tweeted. 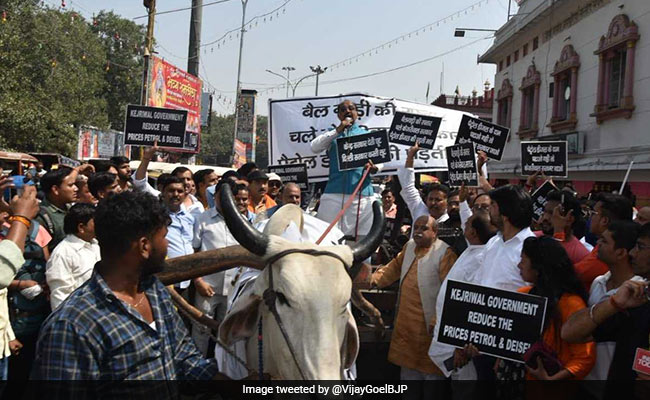 The centre on Thursday gave relief by cutting petrol and diesel rates by Rs 2.50 a litre. The same day, 12 states slashed fuel prices after the government announced a Rs 1.5 per litre cut in excise duty and made state-run oil companies absorb a Re 1 per litre cut. However, Delhi did not follow suit.

Amid rising fuel prices, the centre on Saturday also sought to assure investors that it would not go back to regulating fuel prices, a day after oil company shares tumbled on concerns about a return to a regime that has hurt their profits in the past.

The fuel rates vary from city to city and from pump to pump depending on local taxes and transportation cost. Delhi has the cheapest fuel rates among all metros and most state capitals because of lower taxes.