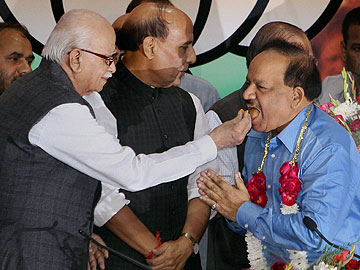 New Delhi: BJP on Saturday said after assuming power in Delhi, it would ensure that IAS officers and other senior bureaucrats have complete freedom to work for the interest of the people, and most of the government decisions and files are available online.

Assuring change, BJP's chief ministerial candidate Harsh Vardhan said, "Delhi will be the first state of the country where the IAS and other senior bureaucrats shall have complete freedom to work and take decision in the interest of the people."

The entire system of the government will be made online so that information may be obtained by the people easily under RTI. Except sensitive cases, BJP proposes to make all the government decisions and proceedings and files online, he said.

"The Supreme Court took the cognizance of the cases of IAS officer Ashok Khemka, Durga Shakti Nagpal of UP and the way in which ministers of UP government played role in the riots of UP by issuing verbal orders to the police officers and bureaucrats.

"BJP will remove all the disparities for this purpose. The people will get rid of corruption, price rise and lack of accountability," said Vardhan.