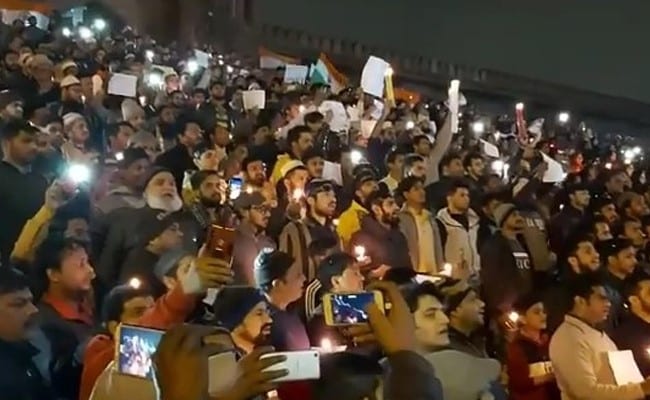 Hundreds took out out a protest march near Jama Masjid that ended with national anthem.

Hundreds took out out a march last night in old Delhi against the controversial citizenship law and ended the protest with the national anthem. A video of the protesters standing outside the iconic Jama Masjid holding candles and singing is being widely shared on social media.

The march that started from Lal Kuan, passed through Chawri Bazaar and ended at the Jama Masjid. Locals, including children, from all parts of Old Delhi -- Lal Kuan, Gali Kasim, Bhuja Pandi and Ajmeri Gate -- were a part of protest. They expressed solidarity with the students and teachers of Jawaharlal Nehru University, who were attacked by a masked mob on Sunday.

#NationalAnthem
"National Anthem" is just sung in school and theatres ! This is from Jama Masjid ..Take a breath...!#JamaMasjid#JamiaMiliapic.twitter.com/7LO1JWo37C

One user wrote: "National Anthem" is just sung in school and theatres ! This is from Jama Masjid ..Take a breath...!

"I don't think in historic #JamaMasjid ever such large gathering has sung our national anthem. Wonderful video. #CAA_NRC #CAA_NRC_Protests #IndiaFirst," one of the tweets read.

Some of the users also shared pictures from the protest march.

Ends with the National Anthem #jamamasjid#NoCAANoNRCpic.twitter.com/O66kc3MYUO

"Boycott CAA" and "Can't protect students in your own country and want to protect minorities of other countries" were among some of the posters held by the protesters. They also held banners mentioning the Preamble of the Constitution.

Last week, hundreds of people in south Delhi's Shaheen Bagh sang national anthem to usher in the New Year, amid the biting cold, during their late-night protest against the Citizenship Act.

Massive protests have been held over the past few weeks against the Citizenship (Amendment) Act (CAA), which makes religion a test of citizenship in India for the first time. The law, along with a National Register for Citizens (NRC) to identify illegal immigrants, will be used to target Muslims, feel protesters that include activists, politicians and many celebrities.

The government says the citizenship law will help non-Muslim minorities from three Muslim-dominated countries - Pakistan, Afghanistan and Bangladesh - to become Indian citizens easily if they fled to India before 2015 because of religious persecution. Critics say it is designed to discriminate against Muslims and violates the secular principles of the constitution.