Video: Biker Saved By His Helmet Twice, In A Matter Of Seconds 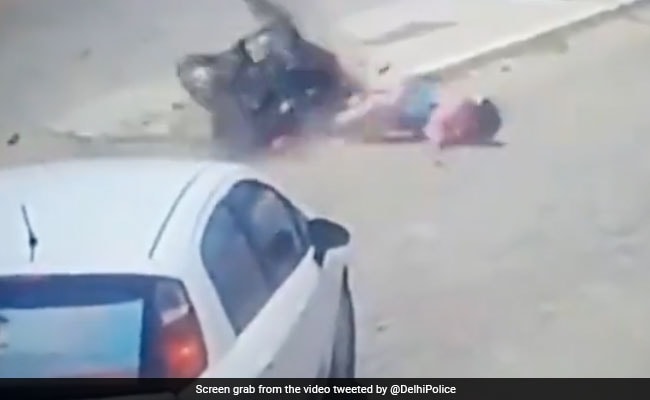 The 15-second video was shared by the Delhi Police on Twitter.

A motorcycle rider was saved not once, but twice by his helmet in a shocking incident involving a car and a lamp post in a video shared on Twitter by Delhi Police, which has used it for a message.

Even though the man took a hit on his head in the two incidents - the bike accident and a lamp post falling on top of the rider, the man avoided a serious head injury because of his helmet. The two incidents took place in a matter of seconds.

A caption at the end of the video reads: 'Wearing a helmet can save you once, twice, thrice and multiple times.'

The 15-second video starts with the rider falling face-first after swerving to miss a car. As the motorcycle slides along the floor, it smashes into a lamp post on the divider.

Shocked and stunned, the rider slowly tries to get up after the crash, but what happens next is shocking.

The lamp post, apparently damaged after being hit by the bike, comes crashing down on the rider, hitting his head.

He is thrown him back onto the ground.

Since being shared 17 hours ago, the video has collected over 26,000 likes and has been retweeted over 5,000 times.

People couldn't believe how lucky the rider was when commenting on the Twitter video.