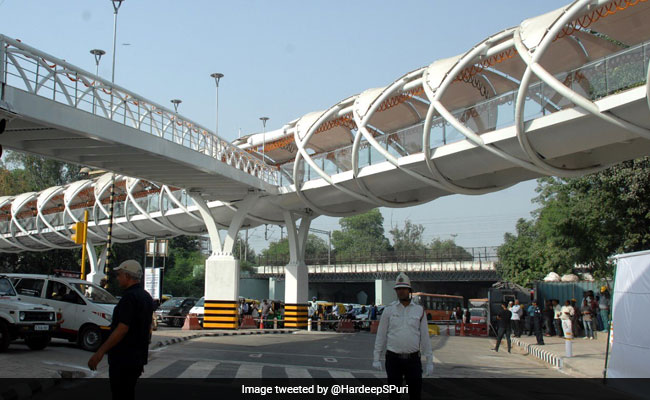 Union minister Hardeep Singh Puri inaugurated the ITO Skywalk in New Delhi today and accused the Arvind Kejriwal-led government of stalling it for one year.

The minister also said the Delhi government created hindrance in execution of several other projects including the Metro Phase-IV.

Mr Puri, who also inaugurated a foot over bridge at ITO, alleged that a "false narrative" was being created around these projects and some people who have nothing to do with the project are trying to take credit.

The Union housing and urban affairs minister claimed that when the Delhi government, which was supposed to provide 20 per cent of the project cost, did not give its clearance, his ministry decided to execute it on its own.

The ITO Crossing and 'W' Point Junction are the two busiest crossings in the city.

There are over 25 major offices and other institutions located in this area. Approximately, 30,000 pedestrians cross various roads around ITO Crossing and 'W' Point. The skywalk, which has been constructed with a cost of Rs 55 crore, has six lifts.

"When I became the minister in September 2017, I was told that the skywalk project, which was cleared in 2016, was still awaiting the Delhi government's nod. We then decided to execute this project on our own," Mr Puri said.

According to the Union housing and urban affairs ministry, the project has been executed with the funds provided by the Centre. The PWD of the Delhi government was an executing agency.

The Delhi government issued a statement saying, "No amount of tall claims and rhetoric will be able to mislead the people of Delhi, who will finally judge, whether cutting ribbons will be a substitute for hard work."

It said that bureaucratic queries were raised about the necessity of the project and a former Delhi PWD secretary, now posted outside the city, raised questions about the need for such a project.

"His objections were, however, overruled by Deputy Chief Minister and Finance Minister Manish Sisodia who headed the Expenditure Finance Committee (EFC), which gave its approval for providing the Delhi government share of Rs 12 crore for the skywalk project," the statement said.