Sukhdev Vihar Bus Accident: Visuals from the spot show extensive damage to the front of the bus.

At least 12 people were injured on Saturday after a bus rammed a tree near southeast Delhi's Sukhdev Vihar, police said today.

The accident occurred in the early hours on Saturday and police were called at 3.20 am.

The Uttar Pradesh Roadways bus had crashed into a tree on Mathura Road in the area. The bus was coming from Agra and was en route ISBT Sarai Kale Khan.

A team from the New Friends Colony police station and ambulances rushed to the spot and many of the injured were given first aid. 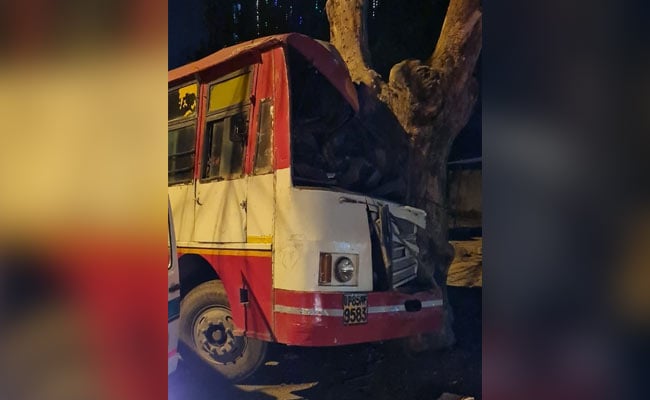 The bus rammed a tree in Delhi's Sukhdev Vihar

All the injured people have been shifted to the Trauma Centre of the All India Institute of Medical Sciences (AIIMS).

Visuals from the spot show extensive damage to the front of the bus.

The driver of the bus is on the run and Agra bus depot officials have been informed about the incident.

A case of accident has been registered and investigation is on.