Visibility on the roads was low this morning, as against Sunday when air quality significantly improved due to increased wind speed and strict control measures

The residents of Delhi woke up to a thick blanket of smog this morning amid warnings by weather officials of falling air quality in the national capital two days before Diwali. The levels of the pollutant PM2.5 was at a "hazardous" 644 or over 20 times the safe limit prescribed by the WHO this morning at south Delhi's Okhla, according to data from the Delhi Pollution Control Board. PM2.5 are fine particles that can penetrate the lungs and cause respiratory diseases.

Visibility on the roads was low this morning, as against Sunday when air quality significantly improved due to increased wind speed and control measures implemented by the government.

Smog kills more than one million Indians every year and Delhi has the worst air of any major city on the planet, the World Health Organisation says.

"As expected, there is a significant bio-mass pollution in Delhi, which has placed air quality in the very poor category despite moderate surface wind speed," said an official with the centre-run System of Air Quality Forecasting and Research or SAFAR.

The contribution of stubble-burning to pollution in the national capital is expected to be 24 per cent today, another weather official said. 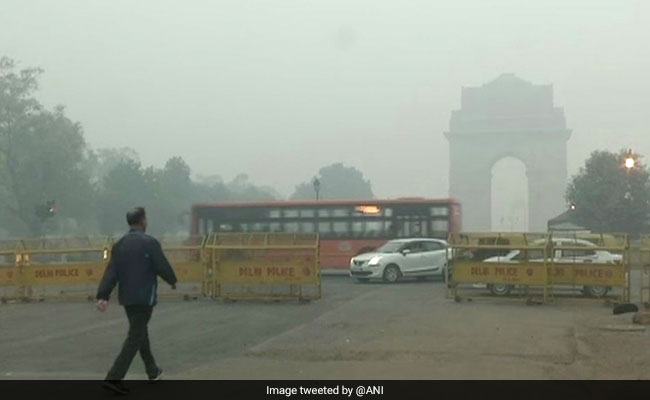 The Indian Institute of Tropical Meteorology also said stubble-burning and other sources of air pollution in the northwest region of India were significantly less on Saturday compared to Thursday last, but warned of a sharp increase in PM2.5 concentration from today.

"If significant-stubble burning continues... in the NW (north-west) region, then its impact is very likely over Delhi and AQI may reach the upper end of the very poor category," the IITM said.

The DPCC has directed the transport department and the traffic police to intensify checking of polluting vehicles and control road congestion till November 10. Construction work involving excavation is banned; no stone-crushers and hot-mix plants that generate dust cannot be run at this time.

"I have sent my children to play outside after weeks (on Sunday). I hope the air quality finally improves and we see a clean Diwali," Mayur Vihar resident Sarita Mathur told PTI.

D Saha, former additional director and head of air quality management division at the CPCB, said no drastic change in pollution level is anticipated as the ground level emissions are under control due to administrative and regulatory measures. "We are likely to have a clean Diwali," he said.