She Fought For Us, Says Husband of Delhi Student Killed Allegedly by Father 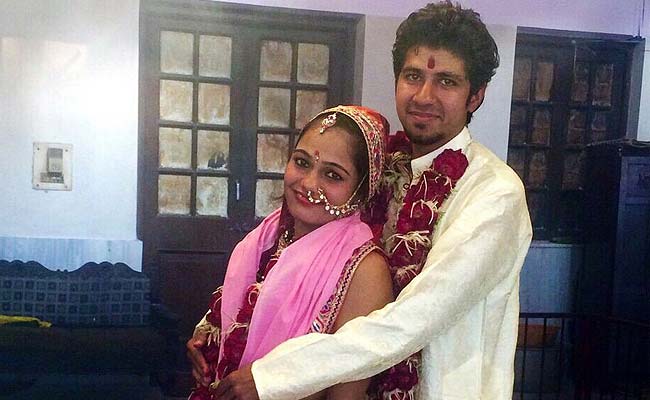 New Delhi: Two days ago, Abhishek Seth was informed by the police that the body of his young wife, Bhavna, had been found burnt in the village that her family belonged to near Delhi. They were married last week.

Her father, who has been arrested, has allegedly confessed that the 21-year-old student was killed by him in a village near Delhi for marrying a man from a different caste. The "honour killing" has shocked the capital because of the profile of the young woman who was killed - she was studying Sanskrit at a well-known college.

"Bhavna was a very brave girl, she fought a lot for us," said her distraught husband, who is 24. He says he is now worried about his own safety, and that his family is receiving threatening calls warning them to drop the police case against Bhavna's relatives. "I have not told the police this yet, but I have mentioned it in press that I need security. A constable can be with me or they can keep my phone under surveillance," he said.

When the couple broke the news that they had secretly married, Bhavna's family asked her to return to their home for a few days so they could plan a big wedding reception for her. She was killed when she moved back into their house in south Delhi and her body was cremated in their village nearby.

"I never got any indication of course that her parents would do this. If I had any inkling, I would have never sent her back home. Nobody thinks one's own parents can kill them," said Mr Seth to NDTV. His location cannot be disclosed because he is worried about his safety. "Six months ago, I called her parents and told them about us. They told me 'You are Punjabi, stay away. We are Yadavs. This won't work'."

He added, "They had threatened me but nothing specific."

The police has arrested Bhavna's father and mother. But Bhavna's husband says her uncle was a primary conspirator.

Promoted
Listen to the latest songs, only on JioSaavn.com
"I face threat from him. He is one of the main conspirators according to me," said Mr Seth. "He has been absconding since Sunday morning. If he did not do anything then why is he missing?"