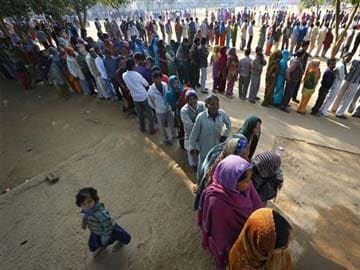 People wait in queue to cast their votes in New Delhi.

According to official data compiled by the Election Expenditure monitoring centre of the Income Tax department, other inducements (sarees, gifts, etc.) worth Rs 4.40 lakh were also seized by the EC-appointed flying squads and surveillance teams.

A total of 21 paid news cases were also registered.

In all, 210 flying squad teams, 210 static surveillance teams and 18 expenditure observers were deployed in the state by the EC as part of its measures to curb and check illegal money power being used in the run-up to polls.

77 cases were registered by I-T and other tax authorities in violation of expenditure norms set by the EC.

596 excise raids were also conducted during the polls, the data said.

Promoted
Listen to the latest songs, only on JioSaavn.com
The expenditure observers were brought on deputation from the I-T, Customs and Service Tax departments.