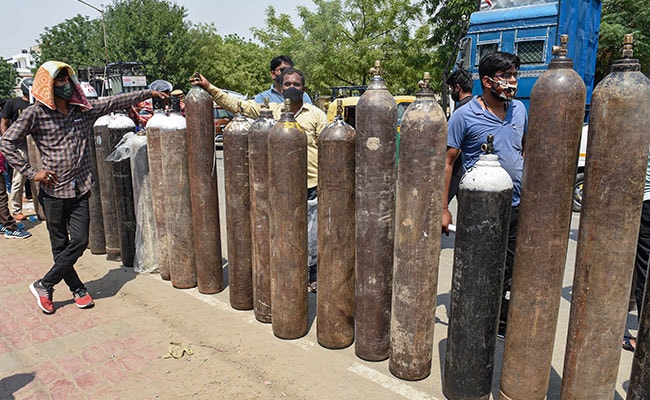 Oxygen supply to Delhi was short by 153 metric tonnes on Thursday, the Arvind Kejriwal government said this evening, as its tug-of-war with the centre over providing oxygen to critically ill patients during the second Covid wave spilled over into a new day.

The Delhi government's oxygen bulletin said the national capital had received 577 MT of oxygen yesterday, against a demand of 976 MT. The city received 730 MT on Wednesday.

There was a decline of 153 MT in 24 hours, the state government said.

The crisis in Delhi and other states - earlier today Karnataka won a Supreme Court ruling on oxygen allotment, and Bengal Chief Minister Mamata Banerjee wrote to Prime Minister Narendra Modi - has been triggered by a devastating increase in Covid cases.

The Supreme Court has ordered the centre - which insists the crisis is a transportation problem rather than supply - to ensure Delhi gets 700 MT of oxygen per day. An irate top court, which last week gave the centre a 24-hour deadline to rectify the situation, warned it against further disobeying its orders.

"When we say 700 MT, it means (amount of oxygen to be supplied) every day. Please do not drive us to a situation to take coercive steps... We are clarifying it will be 700 MT every day," the court said.

"Centre continues to be in contempt for not supplying 700 MT of oxygen to Delhi," it said.

The centre has also been hauled up by the Delhi High Court on this matter.

Over the past two weeks the shortage of oxygen has led to several Delhi hospitals - private and government - panicking over the lives of patients, whose relatives have been forced to run around to get oxygen cylinders on their own, often from the black market.

Last week 12 people died at a private hospital after the oxygen ran out.