On Camera, Delhi Woman Fights Off Kidnappers To Save 4-Year-Old Daughter

Kidnapping attempt: Delhi Police found that the registration number of the bike was fake. They were still able to track down its owner

Delhi Police have arrested two who planned the abduction, but the actual kidnappers are still on the run

A mother fought off two men who tried to kidnap her little daughter in a dramatic incident in Delhi on Tuesday that was caught on security cameras. As the woman retrieved her daughter from the bikers, two neighbours showed the presence of mind to force the kidnappers to abandon the motorcycle, which the police have now seized.

The kidnapping was orchestrated by the child's uncle, said the police. The child's father is a successful cloth merchant and his brother wanted to extract a ransom of Rs 35 lakh after having his niece kidnapped.

The two men who carried out the failed kidnapping are still on the run.

According to police, the two drove up to the four-year-old girl's house at around 4 PM on a black Pulsar. One of them, dressed in a blue shirt and carrying a red backpack, asked her mother for some water and, while she was distracted, grabbed the girl and tried to escape.

The events that followed played out over two 30-second videos that seem to be from CCTV cameras.

In the first, the man in blue comes running out of the house dragging the child, whose frightened screams can be heard. As he bundles the child over the motorcycle, the mother charges out of the house and, with no thought to her safety, rams into the bike and kidnappers, causing them to fall.

She grabs her daughter and clutches her tightly with one hand while holding on to the bike with the other, stalling the kidnappers.

The first kidnapper, thrown off by the woman's fierce charge, was already trying to run away down the narrow gully.

By now neighbours had been alerted and one man, further down the lane, responded by positioning his bike - a Scooty - to block the exit. He then pushed the bike-borne kidnapper to one side before grabbing the other with the help of a second man. 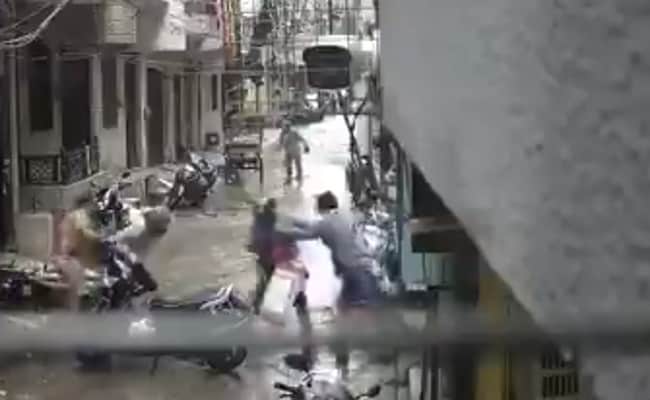 The attempted kidnapping was caught on CCTV cameras

The kidnappers escaped, but left behind the backpack and bike, which could help the police track them down.

Delhi Police found that the registration number of the bike was fake, but still managed to track its owner - Dheeraj, a resident of Jagat Puri.

He reportedly confessed that the child's uncle, Upendra (alias Bittu) was the mastermind. Dheeraj told the cops he had been promised Rs 1 lakh for his role.

The police also found four cartridges and a country-made gun from the backpack.