Sheila Dikshit said no state assembly had the right to pass any resolution in the matter as the award is conferred by the Government of India. 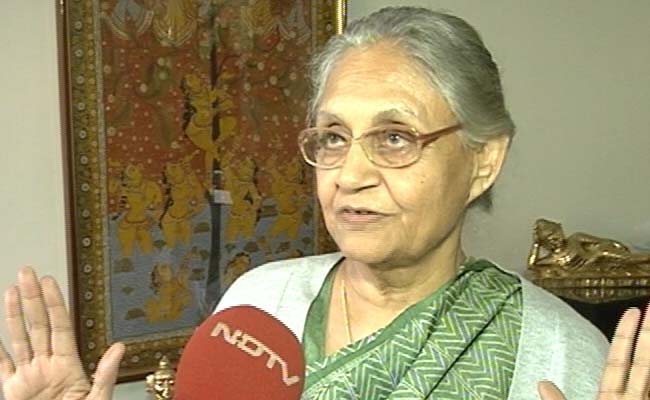 Sheila Dikshit accused AAP legislators of not being concerned about Delhi but instead about Rajiv Gandhi.

Former Delhi Chief Minister Sheila Dikshit on Saturday lashed out at Aam Aadmi Party lawmakers for demanding that former Prime Minister Rajiv Gandhi be stripped of his Bharat Ratna, saying no state assembly had the right to pass any resolution in the matter as the award is conferred by the Government of India.

"This is not a right of any assembly. The Bharat Ratna, (the highest civilian award) and others are conferred by the Government of India. You (AAP MLAs) do not have a right to pass a resolution," the Congress leader told the media.

She slammed AAP legislators for not being concerned about the state of Delhi but instead about Rajiv Gandhi.

"Why are you doing this? It has been two decades since he was given the award. Why are you raising it now? Do you not have any other things to discuss, the state of Delhi for that matter? You are a state administrator so discuss Delhi, its improvement.. You don't do that but talk about Rajiv Gandhi," she said.

An AAP legislator on Friday had demanded that the Bharat Ratna conferred on Rajiv Gandhi be taken back, seeking justice for the victims of the 1984 anti-Sikh riots.

The demand in the Delhi Assembly came as an amendment proposed to a resolution moved by Tilak Nagar MLA Jarnail Singh.

Taking to Twitter later, another AAP legislator said the resolution amendment was not put to vote and that there was no question of it being passed, so the matter had ended.

"In connection with a dispute about a line on Shri Rajiv Gandhi in the resolution passed in the Assembly today, I confirm that the line was not part of the original resolution distributed to MLAs. Jarnail-ji didn't propose that amendment and never put that for vote. Amendments are always put to vote separately and unless passed, can't form part of the resolution," Somnath Bharti said in a series of tweets.

"I further clarify that the amendment I proposed was not put to vote and hence there is no question of passing the same. Hope this settles the dispute," he added.