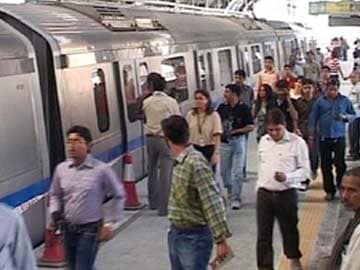 "The aim of exhibiting this wall is to spread further awareness about all the Nobel laureates from India and will be on display from the October 26 to November 1," a DMRC spokesperson said.

The Nobel Memorial Wall exhibits portraits of Rabindranath Tagore, C V Raman, Dr Hargobind Khorana, Mother Teresa, Subrahmanyan Chandrasekhar, Amartya Sen, Venkatraman Ramakrishnan, and this year's Nobel Peace Prize winner Kailash Satyarthi for his "struggle against the suppression of children and young people and for the right of all children to education".

DMRC Managing Director Mangu Singh and Ambassador of Sweden to India Harald Sandberg unveiled the wall in the presence of Ambassador of Norway to India Eivind S Homme.

"The inauguration of the Nobel Wall at Rajiv Chowk has become a sort of tradition to mark the beginning of the Sweden India Nobel Memorial Week. I would like to thank DMRC for partnering with us in this initiative where we pay a tribute to Indian Nobel laureates for their contribution to the world," Mr Sandberg said.

Promoted
Listen to the latest songs, only on JioSaavn.com
"We are extremely delighted to have an addition to the wall this year with a panel on Kailash Satyarthi, winner of the Peace Prize for 2014," the Ambassador added.