It was in November that the son of one of the accused women had committed suicide at a railway track allegedly after being rebuffed by the survivor. 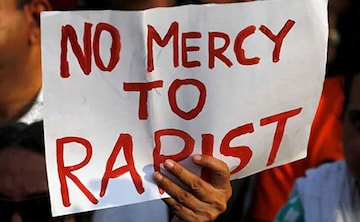 The family has been seeking justice for their daughter. (Representational)

The brutal rape and humiliation of the woman in Kasturba Nagar was a culmination of torture and dire threats her family was subjected to over the last few months.

The younger sister of the survivor told PTI that her sister was being hounded and berated continually since November.

It was in November that the son of one of the accused women had committed suicide at a railway track allegedly after being rebuffed by the woman.

The family swore revenge against the 20-year-old woman, and exacted it Wednesday when she was abducted in an auto, raped by several men, and paraded with blackened face, all in full view of public.

The 18-year-old younger sister of the victim said that on Wednesday her sister was on her way to her place to give her some wheat.

She said her sister was not aware she was being followed by a bunch of people, some of whom had sticks and one even had a pair of scissors in her hands.

It was only when she reached her younger sister's place and called her to come down, the group abducted her in an auto rickshaw and took her to their house.

According to police, the landlord of the house informed the victim's husband that his wife was abducted by a group.

"They snatched my mobile phone so that I cannot report it to police. They abducted my sister in front of my eyes in an auto. On the way, they started chopping her hair right inside the vehicle.

"They then took her inside their home and locked it. They shaved her hair and thrashed her brutally. 'Aur ghalat kaam kiya mere behen ke sath'," she said.

She said the accused had also abducted her nephew with them, but she somehow managed to extricate him from their captivity and hid him with her inside a house as she was scared for his life.

"When all this was happening with my sister, no one came to help her. Out of fear, none of the neighbours came to her rescue," she said adding that she somehow managed to report the mater to police which rescued her sister.

According to police, all 11 accused booked in the matter are engaged in trade of illicit liquor in the area.

Of the 11, nine women and two juveniles, who were allegedly involved in the rape, have been arrested.

The survivor had got married in 2018 and lives in Anand Vihar in a rented accommodation with her 3-year-old son.

The woman said the trouble in her sister's life began with the suicide of the man on November 12. After that incident, she was continually threatened by his family.

Every time they would threaten her she would inform the police and the issue was amicably resolved, but no one foresaw such a brutal attack on my sister, she said.

She said the accused even came to the shop where she worked threatening of harming her sister.

She said they even slapped her twice there and she ultimately was fired from the job for all the trouble.

The sisters' 39-year-old father is paralysed and bedridden.

"There had been no trouble during my daughter's marriage. It is only since last one year that my daughter has been facing harassment," he said.

Ever since the incident, the survivor's house is flooded with relatives who have come from their village and elsewhere to support the family and seek justice for their daughter.

"We want the culprits to be punished severely. No such incident should happen with any daughter in this country.

"We got to know from internet about the incident and decided to rush. Even during her marriage, there was no trouble and everything went on smoothly," said the victim's grandparents.

The two sisters lost their mother in 2020 due to a heart attack. Since then, all the household responsibilities fell on the elder sister, who fell victim to a mob on the Republic Day.