Delhi Chief Minister Arvind Kejriwal had rejected the scam allegation and even dared Manoj Tiwari to arrest him if such irregularities exist. 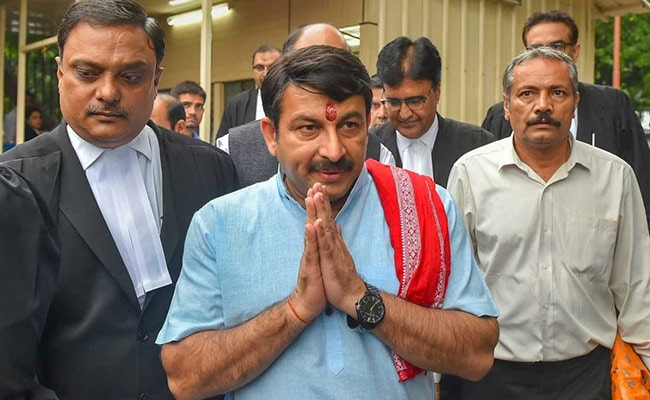 Soon after, Mr Tiwari responded on Twitter saying he refuses to "bow down" to Manish Sisodia's "pressure tactics" and will prove their alleged corruption. He also said they will go to Lokayukt and appeal to courts in the matter.

We refuse to bow down to your pressure tactics @msisodia ,
We will prove your corruption ... @BJP4Delhi stands by the people Of Delhi and will recover this enormous sum of taxpayers money.
We will go to Lokayukt and The Courts https://t.co/ZKziN4ERlb

Manish Sisodia holds the education charge in the Delhi government.

"Deputy Chief Minister and Education minister Manish Sisodia talks about construction of new school rooms. There is a scam of Rs 2,000 crore in it," Mr Tiwari had told reporters on Monday.

Delhi Chief Minister Arvind Kejriwal had rejected the allegation and even dared Mr Tiwari to arrest him if such irregularities exist.

At the press conference, the Delhi BJP chief citing an RTI reply claimed that Delhi government with expenditure of Rs 2,892 has undertaken construction of 12,782 classrooms which could have been done with a maximum spending of around Rs 800 crore.

The Delhi government is constructing classrooms of 300 square feet size with the cost of Rs. 24.86 lakh, he said citing the RTI reply received by Delhi BJP spokesperson Harish Khuarana.

Manish Sisodia too had also lashed out at Mr Tiwari saying that he should get him arrested if he was guilty or apologise for "lying" to the poor people whose children are getting education in good quality schools of the Delhi government.

He also said the expenditure on construction of classrooms cannot be calculated as Mr Tiwari has done.

"He knows no maths or anything about education," Mr Sisodia had said.

In reply to Mr Sisodia's attack on him, Manoj Tiwari said rather than avoiding the question, the Deputy Chief Minister should give specific reply to his claims based on RTI reply.