How The Race To Control Delhi's Civic Body Unfolded: 5 Points

Here is a brief overview of how the AAP, BJP, Congress and others campaigned for the Municipal Corporation of Delhi (MCD) election 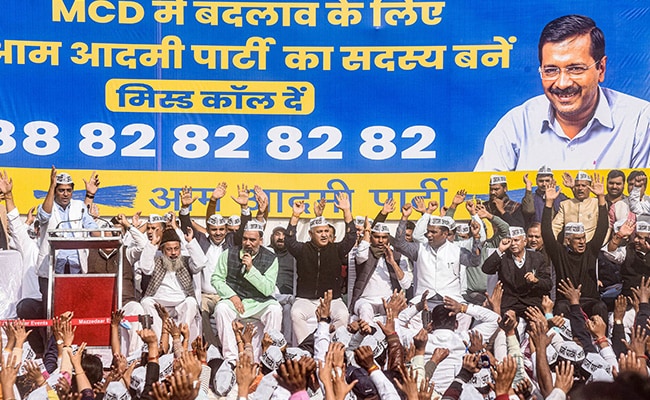 Delhi AAP has won big in the MCD election, a poll of exit polls show

The Aam Aadmi Party has wrested control of the Delhi Municipal Corporation from the BJP's 15-year rule, an NDTV poll of exit polls show.

The Aam Aadmi Party (AAP) is likely to get 155 of the 250 wards in the Municipal Corporation of Delhi (MCD) election.

Here is a brief overview of how the AAP, BJP, Congress and others campaigned for the Municipal Corporation of Delhi (MCD) election and what may have given a boost to the AAP, led by Delhi Chief Minister Arvind Kejriwal, over the BJP, as a poll of four exit polls by Aaj Tak-Axis My India, Times Now-ETG, News X-Jan Ki Baat and Zee News-BARC shows.

Mr Kejriwal highlighted the work that his government has done to improve education and health infrastructure in the national capital as the biggest reasons why the people of Delhi should vote for the AAP.

The BJP connected the Delhi local election with national issues and brought Prime Minister Narendra Modi's "development for all" message to the doorsteps of residents. Confidence in the party was high, despite being in power in the MCD for 15 years and facing a possible anti-incumbency wave.

3. MCD's own troubles over the years

The MCD was earlier divided into three jurisdictions - north, east and south. The north civic body for most of its existence suffered severe funds crunch, with sanitation workers often going on strikes due to not getting wages, sometimes for months. The civic bodies came to be seen as inefficient. They had been complaining to Mr Kejriwal, however, that the AAP government hasn't been giving enough money to run the civic bodies.

Mr Kejriwal in an NDTV exclusive townhall on November 24 had slammed the MCD for not improving the city's living conditions. "The MCD is also very corrupt. Anyone who erects a pillar has to pay the MCD. We have given Rs 1 lakh crore to the MCD, but they have eaten all. If they ate a little less, maybe MCD employees will get salaries on time," Mr Kejriwal said.