Delhi weather: The city is likely to witness moderate to-dense fog for the next 48 hours, India Meteorological Department (IMD) said. 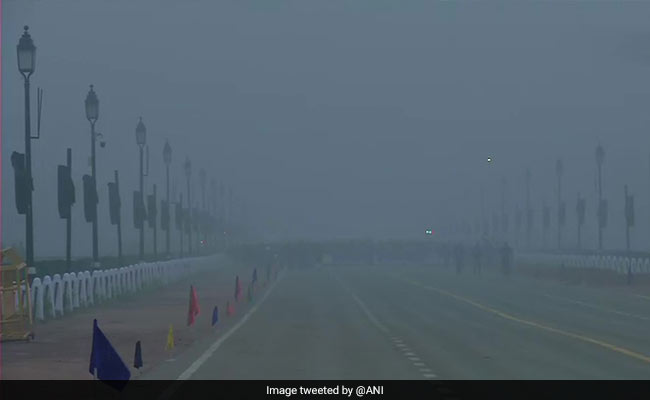 A layer of fog engulfs the national capital early this morning. (ANI)

A thick blanket of fog engulfed the national capital early this morning affecting rail and flight operations as visibility dropped below 100 metres. Conditions on the city roads were no different as vehicles were seen moving at low speeds with emergency lights on.

"The visibility was nearly zero. I had to switch on emergency lights of my car as I commuted for work," said Anuj Srivastava, who works at a firm in Noida near Delhi. He said it took him close to two hours to reach his workplace, which is around 30 kms from his home in west Delhi.

Mahesh Palawat, a top official at weather agency Skymet Weather, a private forecaster, tweeted that visibility at Palam airport was below 100 metres.

#Dense#Fog over #Palam#Airport, #visibility is 100 meters. Runway 28 and 29 both have 600 meters. Kindly confirm #flightStatus before leaving. Chances of #flightdelay. #DelhiFog#DelhiWinters@SkymetWeather#flightdelay

Vistara has also asked its passengers to check updated status of their flights before leaving for airport.

#TravelUpdate Due to bad weather (poor visibility) in Delhi and Ranchi, arrivals/departures from Delhi and Ranchi are likely to get impacted. Please visit https://t.co/9eL33N630U or SMS UK<Flight no.>to 9289228888 for updated flight status. Thank you.

Visibility was reduced to 50 metres in Palam at 5.30 am, a MeT Department official said.

The fog is expected to disperse later in the day and the maximum temperature is likely to hover around 18 degrees Celsius, a MeT official said.

The city is likely to witness moderate to-dense fog for the next 48 hours, India Meteorological Department (IMD) said. The dense fog has been attributed to the incessant rains and hailstorm across the northern plains.