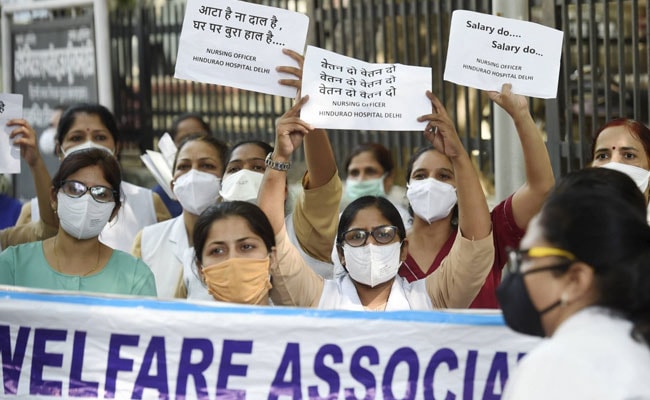 The crisis over pending salaries of doctors of North Corporation-run hospitals deepened on Wednesday as an association of permanent medics threatened that its members will go on an indefinite strike from October 19 if their demands are not met.

"We are an association of senior permanent doctors and we have been working without salaries too for the past three months and we continued to serve people in this unprecedented crisis. But now even we are left with no option," said R R Gautam, president of the MCDA.

He said doctors are being hailed as "Covid warriors" but do authorities expect them to fight this battle on "empty stomach".

"We are demoralised, depressed and our family wellbeing is at stake. We need our salaries so our demands include immediate release of pending three months salaries of July-September; pending arrears, and also pension and retirement benefits to retired doctors, which has been pending for the last many months," Mr Gautam said.

If these demands are not met by Sunday, MCDA doctors will go on "complete indefinite strike" from October 19, he said.

However, lifesaving emergency services will remain unaffected during the strike period to cater to emergency cases, the MCDA said in the statement.

The MCDA, an association of senior permanent doctors of the civic hospitals, was established in 1974 and has about 1,200 members, Mr Gautam said.

The erstwhile unified Municipal Corporation of Delhi (MCD) was trifurcated into North, South and East corporations in 2012.

However, North Delhi Mayor Jai Prakash on Wednesday met agitating doctors and nurses at Rajen Babu Tuberculosis Hospital, and assured them that their issues will be resolved, following which they withdrew their strike, the NDMC said in a statement.

The MCDA in its statement said, "The conditions have become unbearable for us with no solution to this persistent problem in sight. We can fight the COVID-19 pandemic at any personal cost but how to fight with financial hardship.

On one hand MCD is unable to arrange funds to pay salaries to its employees and on the other hand they are not exploring other options like handing over entire health services except public health to some other authorities, it said.

"We humbly request that since selection and appointment of our doctors is being done by the central government, hence entire

health services, including administration of doctors, except public health services be handed over to the Centre, which would not only help ensure timely payment of our salaries but would also prevent further inconvenience to general public due to repeated agitations," Gautam said.

The MCDA also said as many peripheral health units are involved in sampling, contact tracing and data reporting of COVID-19, hence suitable alternate arrangements be made beforehand to avoid any hardship to patients and concerned government organisations or authorities.

Meanwhile, Delhi Health Minister Satyendar Jain at a press conference here reiterated that North Corporation should hand over hospitals to the Delhi government.

Jain claimed that the MCD had earlier "tried transferring the hospitals to the Centre, but it did not take them".

"We give funds to the MCD, but we are unaware of the expenditure since they do not get an audit done. A formal written proposal has been sent to the Centre to transfer these hospitals to the Delhi government," he said.

Doctors of the 900-bed Hindu Rao Hospital, the largest civic facility in Delhi, have been agitating for the past several days, seeking release of their salaries due for the last three months.