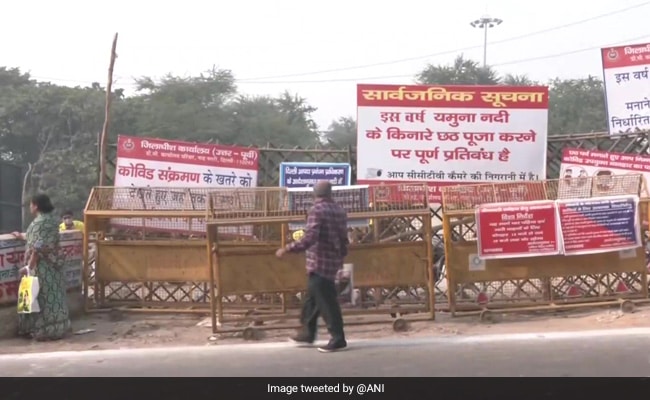 Delhi High Court dismissed a plea challenging decision to prohibit the devotees from performing Chhath Puja at the banks of the Yamuna river.

Justice Rekha Palli said that there is no merit in the petition and the petitioners have not pointed out how devotees are entitled to perform Chhath Puja at the banks of Yamuna.

The Court noted that that the Puja has commenced today and therefore no order for alternative designated sites at this stage can be passed.

According to the counsel of the petitioner, authorities concerned have illegally and unreasonably prohibited the devotees from performing Chhat Puja at the banks of the Yamuna river without assigning any reason in their notifications/orders.

The petitioner has sought to quash the impugned orders dated October 29, 2021, and October 30, 2021, and the actionable points for Chhath Puja-2021, whereby and to the extent it was decided that ''no site shall be designated on the banks of river Yamuna'' being illegal, unreasonable, vague, and the result of arbitrariness. DDMA on October 29 had permitted to perform Chhath puja with imposing certain restrictions including not performing Puja at banks of Yamuna.

The petition filed by advocate KK Jha and associates said that the environmentalists have claimed that the festival of Chhath is one of the most eco-friendly religious festivals that should be used to spread "the message of nature conservation".

"The Chhath Puja festival is held to wish children happiness, prosperity, and long life. Chhathi Maiya is Lord Surya''s sister, according to legend, " read the petition.

The petitioners have been organizing the Chhath Puja festival at the banks of the river Yamuna which is at a very short distance from the colonies namely Sonia Vihar and Wazirabad.

The petitioner's society said that the devotees of the areas and of the whole of Delhi could not celebrate the Chhath Puja festival last year, due to the Corona pandemic and they remained quiet considering the grim situation.

But this year, when the Corona is an almost controlled situation and most of the people of the areas/ Delhi have got vaccinated, the prohibition from the side of the respondents from celebrating the Chhath festival at the banks of Yamuna river is not legal and reasonable.

In fact, the respondents have violated the fundamental rights of the people to perform the Chhath Puja by not allowing them to go to the river Yamuna in Delhi.

The petitioner said that the respondents have been unreasonably playing with the sentiments of the devotees of the Chhathi Mazya for the last few months.

The petitioners' society sought to direct the respondents to set up an enquiry as to how and to what extent the pollution will be caused to the river Yamuna if the petitioners and the people/devotees residing in the Sonia Vihar and Wazirabad areas are allowed to perform Chhath Pooja at the banks of river Yamuna.

The petitioner also sought to direct the respondents to make alternate and appropriate arrangements for the devotees residing in Sonia Vihar and Wazirabad areas so that they may offer arghya (offering of water) to the Sun-God by standing at the knee-level water.