Delhi Government Formation: After a landslide victory in Delhi assembly elections for the third time in a row the party chief Arvind Kejriwal met Lieutenant Governor Anil Baijal this morning 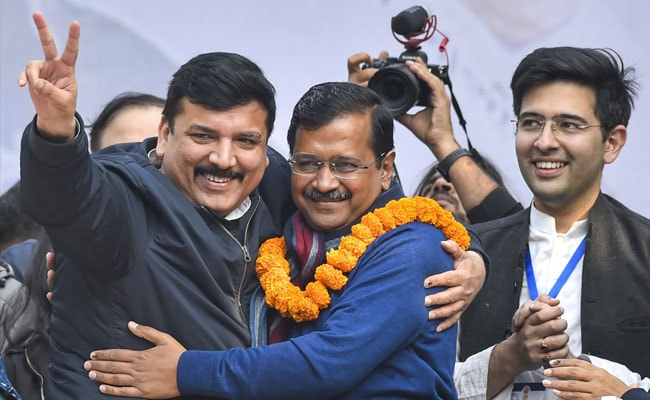 The Arvind Kejriwal-led Aam Aadmi Party swept the Delhi Assembly polls with 62 seats, five less than in 2015, as per the final results announced by the Election Commission on Tuesday.

After a landslide victory in Delhi assembly elections for the third time in a row the party chief Arvind Kejriwal met Lieutenant Governor Anil Baijal at Raj Niwas this morning. Mr Kejriwal also called a meeting of all the elected MLAs to take decisions on the same. The party will also decide the new Cabinet of the government.

Arvind Kejriwal will take oath on February 16 at the Ramlila Maidan in New Delhi.

Mr Kejriwal yesterday declared, "I love you Delhi," from the party office, predicting the beginning of a "new kind of politics" focussed on local issues and the government's delivery on Tuesday.

Feb 12, 2020 13:31 (IST)
Arvind Kejriwal will take oath as Delhi CM at Ramlila Maidan: Manish Sisodia
Manish Sisodia today invited all the citizens of Delhi to grace the oath-ceremony on Sunday and bless Arvind Kejriwal.
"A lot of vicious efforts were made yet Delhi has showed immense support and showered their blessings on us, proving that Mr Kejriwal is the son of Delhi, and we are their own party," Mr Sisodia said.
"Today loving the nation means that you give them best education and health and we want to make a model where issues like electricity and water are at the core," Mr Sisodia added.
Feb 12, 2020 13:26 (IST)
Arvind Kejriwal with AAP MLAs

Delhi: A meeting of newly-elected AAP MLAs was held at the residence of AAP chief & CM-designate Arvind Kejriwal today. He was elected as the leader of the legislative party during the meeting. He will take oath as the CM on 16th February. pic.twitter.com/X15NOVKy1O

PC Chacko tenders his resignation from the post of Delhi Congress in-charge. https://t.co/4sj1YzVKs6

Delhi: Newly-elected Aam Aadmi Party (AAP) MLAs arrive at the residence of CM-designate and AAP chief, Arvind Kejriwal, for a meeting called by him. pic.twitter.com/iZjcEhSdgp

Feb 12, 2020 12:07 (IST)
AAP supporters gather outside Arvind Kejriwal's residence to celebrate party's triumph
Aam Aadmi Party (AAP) supporters gathered outside the residence of AAP national convenor Arvind Kejriwal and danced to the beats of drums, a day after AAP secured a massive victory in Delhi Assembly polls.
One of the AAP supporters grabbed all the eyeballs by celebrating AAP's triumph with gaiety and enthusiasm while dancing to the beats of drums.
Feb 12, 2020 11:56 (IST)
The Aam Aadmi Party (AAP) chief will also meet the party MLAs today. The legislators will then elect him as the leader of the legislative party, following which he will stake claim to form government.
Feb 12, 2020 11:47 (IST)
AAP's focus on governance issues trumped BJP's polarisation bid: Shiv Sena
The Shiv Sena said Aam Aadmi Party's campaign designed around the works done by it won it a landslide victory in the Delhi Assembly polls while the BJP's "polarisation attempt" failed to click with national capital voters.
The Shiv Sena praised Delhi Chief Minister and AAP president Arvind Kejriwal, saying he single-handedly took on the "army of BJP leaders", including chief ministers and central leaders, and successfully showcased the works done by his government in fields like education and health.
"This is rare as elections in India are generally contested on sentimental issues," an editorial in Sena mouthpiece "Saamana" said.
Feb 12, 2020 11:43 (IST)
AAP chief Arvind Kejriwal mets Lieutenant Governor Anil Baijal