Arvind Kejriwal Will "Work Much Harder", Says His Father After Poll Win

On Tuesday, Arvind Kejriwal's family - wife, his father and two children - was present at the Aam Aadmi Party office when the counting of votes for the assembly election was on. 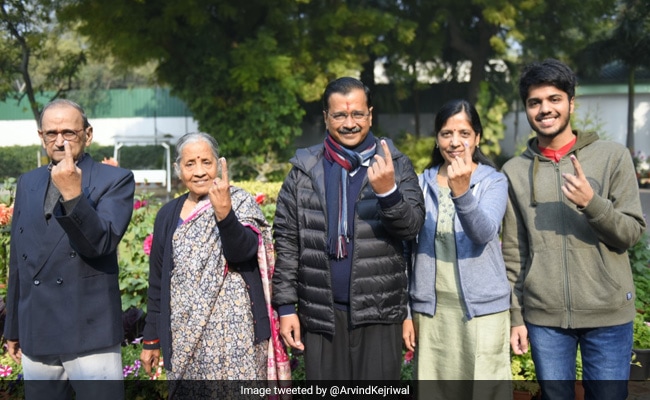 Arvind Kejriwal shared a picture of his family after they voted.

Arvind Kejriwal will work "much harder" in his third stint as Delhi's Chief Minister, his father Gobind Ram Kejriwal said today afer the Aam Aadmi Party made a resounding comeback in the national capital on Tuesday and won 62 of 70 assembly seats.

"I read in the newspaper that even Maharashtra is following the steps which he (Arvind Kejriwal) has taken such as waiving off electricity bills. Arvind will now work much harder this time," he further said.

On Tuesday, Mr Kejriwal's family - wife, his father and two children - was present at the Aam Aadmi Party office when the counting of votes for the assembly election was on.

Later in the day, after Arvind Kejriwal's stunning return to power, the party office saw a double celebration as it was also the 54th birthday of Sunita Kejriwal, AAP chief's wife.

"I had believed that there will be victory and a good one at that. The people of Delhi have given a good gift," Sunita Kejriwal, who was earlier seen cutting a birthday cake, told NDTV in an interview along with her children Ankita and Harshit.

Mr Kejriwal is set to take oath as Delhi's Chief Minister for a third consecutive term on Sunday along with his team of ministers at Ramlila Maidan.

"We will be holding the oath-taking ceremony on Sunday at 10 am... Everyone in Delhi is invited to come and bless their son, their brother, Arvind Kejriwal and take an oath for a better Delhi," top party leader Manish Sisodia said this afternoon during a press conference along with Mr Kejriwal.