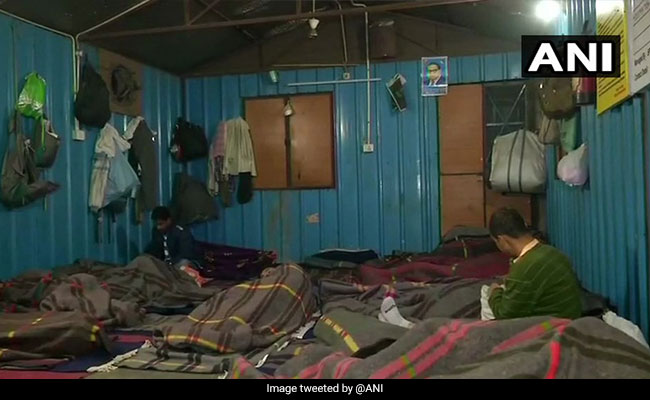 Cold wave conditions gripped the national capital with the minimum temperature dipping to 4.7 degree Celsius, which is three degrees below the normal at this time of the year. Friday was the coldest day of the season for the city at 4 degrees Celsius.

The worst sufferers in the cold, the city's homeless, flocked to the night shelters, to survive the chilly nights.

The night shelters, locally called 'raine baseras', are run by the state government, where the homeless can spend the cold nights. "For daily wage labourers like me, renting a room is not feasible in a city like Delhi and every single day in the cold weather is the real challenge," Nusrat, who spends her nights at a shelter in Sarai Kale Khan, told news agency ANI.

Rajayranjan, the man who looks after one of the shelter homes in Sarai Kale Khan, said that at present there are 54 occupants but the number will go up enormously. "There are mats, blankets, and other facilities for the people. Earlier, outsiders used to provide warm clothes for those who stay here. However, nobody has come to distribute blankets this year till now," he said.

Delhi has around 248 night shelters and each can accommodate around 60 people.

The meteorological office issued a cold wave warning for the next few days. Today the skies will be clear, with moderate fog and haze. "Cold wave conditions are likely to prevail. The maximum and minimum temperatures are likely to hover at 21 and 4 degrees Celsius, respectively," the weather office said.

The maximum temperatures at most places in Punjab and Haryana hovered between 18 and 22 degrees. Amritsar and Ludhiana in Punjab recorded lows of 3.3 and 3.5 degrees, respectively.

The Haryana government has declared winter vacations in all schools across the state from January 1 to 15, 2019.

(With inputs from ANI & IANS)