"Honour To Be Detained": Yogendra Yadav Tweets 1,000 More With Him

The Swaraj Abhiyan chief was later released by the police even as protests continued across the capital. 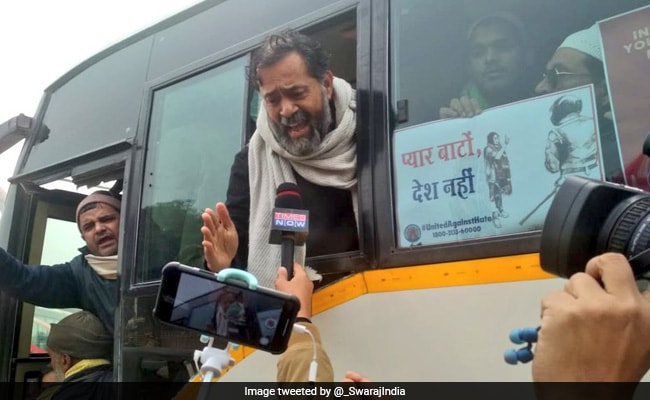 Swaraj Abhiyan chief Yogendra Yadav today announced that he is among thousands who have been picked up by the police for protesting against the Citizenship Amendment Act in New Delhi, and said he was "honoured" to be detained.

"It is an honour to be detained on 19th of December, a small tribute to Ashfakulla Khan and Ramprasad Bismil. Happy to be in the company of Dr Dharamvir Gandhi, ex-MP, Patiala," he tweeted, amid an intense clampdown on the national capital by the authorities in an attempt to curb protests against the controversial law.

It is an honour to be detained on 19th of December, a small tribute to Ashfakulla Khan and Ramprasad Bismil.
Happy to be in the company of Dr Dharamvir Gandhi, ex-MP, Patiala pic.twitter.com/odFCzMJQNf

Mr Yadav also said that the police were detaining peaceful protesters en masse in Bengaluru, and the only thing holding them back was shortage of transportation facilities. "Batch after batch of students, activists, writers are being arrested. Since police ran out of buses, now they have stopped arresting. They are waiting for more buses. Peaceful protest continuing," he said in another tweet.

Many Left party leaders, including D Raja, Sitaram Yechury, Nilotpal Basu and Brinda Karat, were also detained from the venue of another protest at Mandi House.

The mass detentions came on a day when massive jams were witnessed in many parts of the national capital, with the authorities barricading roads, imposing traffic restrictions and suspending Internet services to clamp down on planned protests against the Citizenship Amendment Act. The Delhi-Gurgaon border was among the worst affected.

The police also imposed a ban on large gatherings under Section 144 of the CrPC near Red Fort in central Delhi, the starting point of one of the proposed rallies, and many protesters who came there were subsequently detained. Traffic cops said they are inspecting every car entering the city to ensure that people planning to join the march called by Left parties and other groups do not enter.

Down south in Bengaluru, historian Ramchandra Guha was detained by the police in the middle of an interview during a protest against the Citizenship Amendment Act along with many others. The 61-year-old was participating in a protest at Town Hall in the city, where a ban on large gatherings was enforced from Wednesday evening.