CCTV camera footage shows the man sneaking up to the woman, and snatching her chain while she loses her balance and falls down 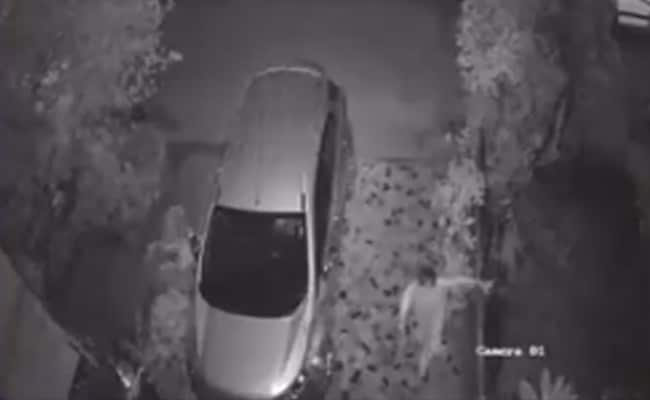 The incident occurred on Saturday at around 9.43 pm in South Delhi's CR Park area.

A man snatched a 67-year-old woman's bag in Delhi on Saturday in a shocking incident that was captured on CCTV. Three people have been arrested in the theft case, police said.

The incident occurred on Saturday at around 9.43 pm in South Delhi's CR Park area.

In the 29-second video, the woman can be seen walking down a car parking lot while the robber is chasing her.

He snatches her handbag, catching her unawares. She tries to hold on to it, but the accused proves to be too strong for her. She loses her grip and falls down, while the man snatches her chain and flings her handbag aside before running away.

After realising what had happened, she gathers strength to get up and walks with a limp, possibly towards her house. A search has been launched for the accused.

Of the three men arrested, two are 19-year-old and third one is 18. The arrests were made within 24 hours of the robbery, police said. A bag, some cash, a mobile phone, the woman's ID card and a vehicle used in the robbery have been recovered.

In another chain-snatching incident in the national capital in February, a 25-year-old woman lost her life when the person who tried to snatch a chain from her stabbed her.

The woman was her child during the robbery bid in Delhi's Adarsh Nagar locality.

The CCTV footage showed two women walking when the person approaches them from behind and makes a snatching attempt.

On facing resistance, he stabbed the woman and ran away.

In another incident in Delhi's Dwarka area in March, a woman was arrested for snatching a man's gold chain. According to news agency PTI, the man told the police that two unidentified women stopped him after he reached a traffic signal. He was then taken to a deserted area and robbed.

The law commission also sought the word "snatching" to be added to theft in Section 410 of the IPC.