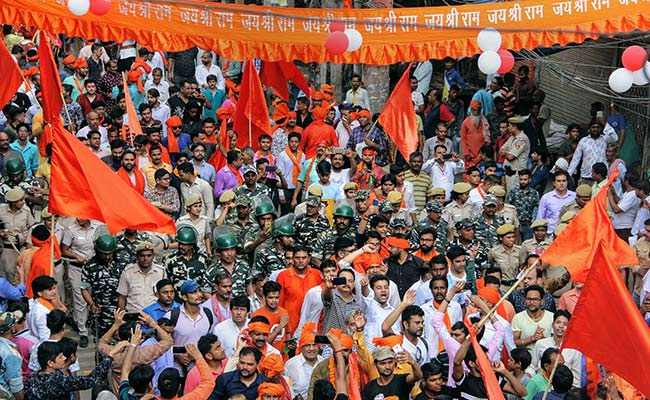 "Shobha Yatra" was organised by VHP to commemorate the reinstallation of statues of a temple in Delhi.

Violence erupted on July 1 over a parking dispute in Delhi's Hauz Qazi which led to the vandalism of a temple in the area. Police has since arrested 17 people have been in the case.

The statues of the temple were reinstalled on Tuesday and a "Shobha Yatra" was organized by the right-wing group Vishwa Hindu Parishad to commemorate the reinstallations. Former minister and senior BJP leader Vijay Goel also attended the procession.

Hans Raj Hans, a singer-turned-politician, was elected from the North West Delhi seat in the Lok Sabha election. He made his political debut with the Shiromani Akali Dal before joining the Congress and then the BJP.

Last week, a fruit seller, Sanjeev Gupta, had an argument with Aas Mohammad, who had parked his car outside his home. The argument escalated and Aas Mohammad allegedly brought people with him and attacked the house of Sanjeev Gupta, who called the police.

As Aas Mohammad was called for questioning, a group demanded his release outside the police station. The group later attacked a temple in the neigbourhood and vandalised statues.

Home Minister Amit Shah had summoned the Delhi Police Commissioner to reportedly discuss the incident later in the week.

BJP lawmaker Gautam Gambhir, in a tweet days later, called for "strict punishment" for the attackers. "Those who attack our place of faith and think they can divide us are wrong. We will not let the religious unity which is deep-rooted in Indian culture be affected by these acts. The attackers should get strict punishment and I appeal to the people of Delhi to maintain peace," he had said.