"From A Brother...": Arvind Kejriwal's Message On Free Bus Ride For Women

Bhai Dooj 2019: A total of 13,000 marshals have been deployed in public buses to ensure the safety of women on board as Delhi government rolls out free bus travel scheme for women. 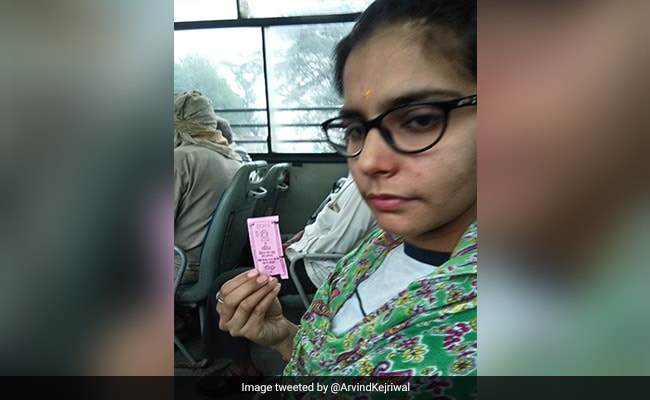 Arvind Kejriwal shared a picture of a woman traveller holding a pink ticket.

The country can progress when the women will progress, Delhi Chief Arvind Kejriwal tweeted this morning as his government rolled out a travel scheme today that offers free rides to women in the national capital in over 55,000 state-run buses. Women travelers will be given pink tickets in Delhi Transport Corporation (DTC) and cluster buses to avail the free-ride scheme.

"Pink Ticket... I send heartiest greetings on Bhai Dooj to all the sisters of the Delhi family. May you stay safe and progress... The country can progress only when women progress...," Mr Kejriwal tweeted in Hindi, highlighting that the scheme begins on Bhai Dooj, a Hindu festival that celebrates brother-sister bond.

He also tweeted a picture posted by Delhi Transport Minister Kailash Gehlot of a women sitting in a bus, holding a pink ticket.

"Free-ride for women in Delhi buses has started from today. Congratulations Delhi! Apart from women safety, it will also increase the role of women in Delhi economy..." he wrote in a tweet this morning in Hindi.

The number of marshals in public buses, deployed to ensure the safety of women on board, have been increased to nearly 13,000, Mr Kejriwal said on Monday. "We are committed to boost(ing) security of women in Delhi. And, I don't think the level at which we have scaled up the strength of bus marshals, it has been done in any city in the world," he added. Earlier, 3,400 marshals were deployed in the public buses.

The notification to implement the free-ride scheme from today was issued by the Delhi government last night. The facility will also be available in Noida-NCR, airport and other special services operated by the DTC and cluster scheme operators. The Delhi government will reimburse transporters based on the number of pink tickets issued.

Mr Kejriwal had announced free bus travel scheme for Delhi women in his Independence Day speech. The Delhi cabinet had on August 29 given in-principle approval to the scheme of providing free bus rides to women with a rider on female employees of the city government that they have to give up their transport allowance to avail the facility.