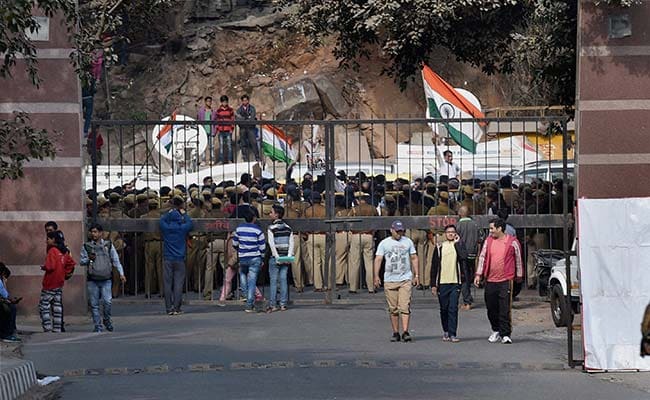 New Delhi: Upping its ante against the JNU administration, the ABVP today lodged two police complaints against the varsity's associate dean for giving permission to the controversial Afzal Guru event and professor Nivedita Menon for her alleged remarks justifying pro-liberation slogans on Kashmir.

In his complaint Mr Sharma has given statements attributing it to Ms Menon.

"Everyone knows that India is illegally occupying Kashmir. It is said the world over. Everybody accepts (it)," one of the statements attributed to Ms Menon in the complaint said.

"This attracts criminal prosecution and appropriate action must be taken in this regard," Mr Sharma said.

The student organisation also lodged a police complaint against the JNU associate dean for giving permission for the February 9 event against hanging of Parliament attack convict Afzal Guru during which anti-national slogans were allegedly raised.

"I request you to kindly take strong action against the concerned authority that had given permission and silently supported February 9 programme," Mr Sharma said in a separate complaint.

The Joint Secretary also alleged that he has already given a complaint to the JNU administration but no action has been taken after which he approached police.

The university had taken back the permission 15 minutes before the event was to start after Mr Sharma had complained about the event on February 9 but the organisers had gone ahead with the programme.

While the associate dean was not available for his comments on the issue, Nivedita Menon, who teaches at the Centre for Comparative Politics and Political Theory at the School of International Studies in JNU said, "I don't believe anything I said was anti-national".

Police officials confirmed that the two complaints have been received but no FIR has been registered yet.