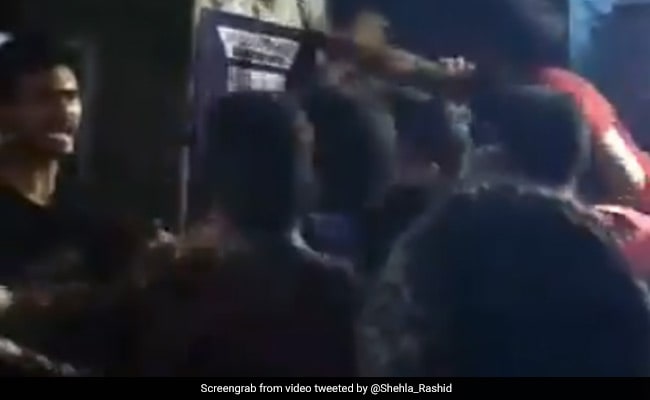 A united front of Left student groups Sunday won all four central panel posts in the union defeating the ABVP by considerable margins.

While the AISA alleged that the ABVP members attacked students with a former student being almost "lynched" and the new JNUSU president being beaten up, the RSS-affiliate claimed its activists were attacked by Left supporters.

This is the second incident of violence on campus after clashes on Saturday ahead of the counting, which was suspended after election authorities cited "forcible entry" and "attempts to snatch away ballot boxes".

He said members of the ABVP were thrashing an AISA member and when the JNUSU members intervened, they, too, were assaulted, Balaji said.

"Today, ABVP students randomly attacked students. I was called to the Sutlej (hostel) where a student was attacked with sticks. The mob was attacking any student who they thought was a friend of the student they were attacking," Balaji alleged.

He claimed that ABVP members "threatened him, former JNUSU president Geeta Kumari and others".

"The group turned into a mob and attacked a former JNU student at the Jhelum hostel, chased him, and almost lynched him in the lawns. I ran with other students to save him, who had fallen unconscious after the beating, and took him to an ambulance," Balaji added.

Balaji also claimed that the ABVP members attacked them when a Police Control Room (PCR) vehicle was taking them away from the campus.

The ABVP, however, claimed that AISA activists assaulted their members.

"Three JNU students affiliated to the ABVP were attacked by the criminals hiding as champions of Communist ideology. About 15-20 Left workers, including non-students, led by the outgoing JNUSU president Geeta Kumari and one of her close friends led the attack," the ABVP said.

The student group alleged that the Left workers entered a student's room and hit him with sticks and punched him. Two others were also injured, the ABVP claimed.

The ABVP and the AISA have both filed complaints at the Vasant Kunj police station.

In a tweet, JNU student leader Shehla Rashid accused the "ABVP mob (of) attacking Abhinay (former JNUSU councillor) and how "security guards tried to protect him while ABVP guys continued their attack".

ABVP mob attacking Abhinay (former JNUSU Councillor) who is taking shelter in the guard room, exhausted, tired after being chased by ABVP goons. Security guards trying to protect him while ABVP guys continue to attack him. In the end, Saurabh Sharma attacking the cameraperson. pic.twitter.com/fa5zpYfOtz

Deputy Commissioner of Police (Southwest) Devender Arya said the situation was under control.

"The PCR got calls about a scuffle between students in JNU around 3 am. Complaints have been received in Vasant Kunj police station. Legal action is being taken. Police arrangements are in place," he said.

Everyday ABVP finds an excuse to act on its impulse to beat up people in JNU & an entire troll army comes to their defence. Right now, they are beating up students outside Jhelum Hostel, calling them 'Naxali.' But that's 'not good enough' for the blood-baying trolls.

The JNU Teachers' Association will march this evening from Ganga Dhaba to Chandrabhaga Hostel to protest the violence on campus.