Gurgaon-based Ajeet Bajaj and his daughter Deeya climbed 8,848 metre to become India's first father-daughter duo to successfully reach the summit of Mount Everest, the world's highest peak on May 16 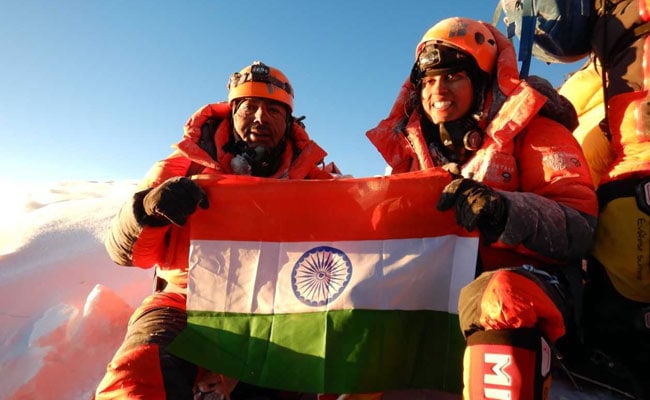 Ajeet and Deeya Bajaj reached the summit of Mount Everest on May 16.

New Delhi: Veni, vidi, vici (I came, I saw, I conquered), the famous Latin phrase attributed to Roman Emperor Julius Caesar sums up the Gurgaon-based father-daughter duo's 8,848-metre climb to become India's first such combination to successfully reach the summit of Mount Everest, the world's highest peak on May 16.

It was Ajeet Bajaj, a Padma Shri awardee, and his daughter Deeya's first attempt at climbing the Everest and despite life-threatening challenges, extreme weather conditions and the arduous nature of the climb, they came back home feeling wonderful and proud.

Over a decade ago, 53-year-old Ajeet Bajaj, who runs a couple of adventure travel companies, became the first Indian to ski to the North Pole and the South Pole within a year. His elder daughter Deeya graduated in Environmental Science, and trained at the Nehru Institute of Mountaineering (NIM) in Uttarkashi before she undertook the 20-day-long Trans Greenland Skiing Expedition when she was 14; and climbed Mt Elbrus (5,642 m), the highest mountain in Europe, in 2012.

The daring father and daughter spoke to ndtv.com this morning. Excerpts from the conversation:

Ajeet: Last year, we decided to climb the Everest. Training was super fun. We began with working out at a gym to get into really good shape. We ran and swam together. Then we did an expedition in Ladakh, 20,500 ft, in August. The idea was to get out and climb together as a father-daughter team before the big climb.
Deeya: We did three more training expeditions. We went to Nepal in December, we met our Sherpa team and bought equipment and went over the Renjo-La Pass. We went back to Ladakh for a couple of weeks, stayed with the army and were lucky to spot a snow leopard.
Ajeet: When we were confident of ourselves, we attempted the climb from Tibet on April 10 and planted the tricolour on Mount Everest on May 16.

Adventure is a way of life

Ajeet: I was born in Dharamsala in Himachal Pradesh. My father introduced me to the outdoors. He took me out trekking in the mountains. I attended a school in Himachal and went to Delhi's St. Stephen's College, which had a strong outdoor club. I started climbing, rafting, skiing and eventually took adventure sports professionally. So now, it's a hobby, passion and profession rolled into one for me. I was lucky enough to introduce Deeya early into extreme outdoors and she took to it naturally.
Deeya: Ever since I was little, I have been outdoorsy and sporty. I swam for school nationals, have a black belt in taekwondo... I am a lucky to have my dad as my partner. We did a cross-country skiing in 2012, and I was the youngest person on the planet to ski across the Greenland ice cap, which is the second largest chunk of ice after Antarctica.

Ajeet: We were both in good shape, but we were still apprehensive... we had butterflies in the stomach... the fear of the unknown. Halfway through our journey, there was a huge storm one night. We were climbing on steep snow slopes and it was extremely hard with winds gusting 50-60 km per hour. We were worried that our tent was going to disintegrate or would get blown off with us. A lot of negative thoughts crossed our minds. We didn't think we would be able to go ahead that night, but luckily the morning after the wind died down and things fell back into place.
Deeya: My mom was stressed out but we kept in touch with her. She worries for us but she has been our pillar of strength. There were no issues with mobile network. In fact, the signals were pretty good. I even FaceTimed with my sister who is in Switzerland.

The last night before the feat

Ajeet: We didn't sleep much. It was really cold. The temperatures were anywhere between -35 to -40 degrees Celsius. We continued climbing, and to our shock, my oxygen mask malfunctioned, it froze, just an hour and a half below the summit. I couldn't breathe. I was pushing myself hard. Deeya couldn't have waited for me, she was climbing well and it made no sense to make her wait.
Deeya: We were to do it together. But stopping at that point would have ruined my chances as well. So I kept climbing. It was a difficult call that we took.
Ajeet: Luckily, I found a spare mask and could resume climbing. I followed her up to the summit. I climbed as fast as I could to catch up with her. Deeya reached the summit at 4.30 am. It was dark, but she was lucky enough to see the sun rise from the Everest. I reached 15 minutes after her. The mountain goddess was kind to us. We both were extremely emotional. Planting the national flag on the summit was a very, very special moment for the both of us.

Deeya: It was a lot of relief. We both did it. It was surreal. It took a while for the feeling to sink in. But the minute it struck us that a long treacherous way down awaited us, the scary thoughts clouded the happy high, briefly.
Ajeet: Yes, getting to the summit was a big high. But we soon realised, going up is optional, coming down is mandatory. It is another ball game because you could see the scale of the drop and how narrow the path is and how dangerous it is going to be. One has to be really, really careful and focussed.

Ajeet: My wife, friends and a few others from our family came to the Delhi airport to receive us. When we reached our colony in Gurgaon in a coach that they hired, we were surprised to see banners all over. The residents welcomed us at the front gate. There were garlands, dhol walas and mithai (sweets). That's the great thing about our country, everybody joins in, and it just made it so special. It was very touching, emotional.

Ajeet: We are so exhausted. We will take time to adjust to this heat... we are suddenly thrown from -40 to 44 degrees Celsius... it hits you so hard. But yes, there will be more adventures.  We do have a bucket list and it features a mix of climbing and adventure sports.

Promoted
Listen to the latest songs, only on JioSaavn.com
Girl child

Deeya: I have been really lucky because my parents have supported me in all my adventures. In our country, where adventure sports are usually associated with boys, my father was taking me to all sorts of adventures across the world. Through this expedition, we wanted to send out a message that girls can do anything and  can reach any height if they have the support of their families.

Over 153 Dengue Cases In Delhi This Year, 10 In July: Report