CWG organisers in the past too faced criticism 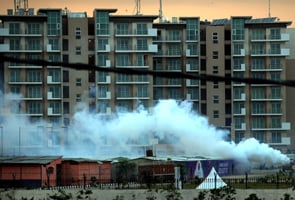 New Delhi: Indians may have felt let down when their nation was severely criticised for the chaos surrounding the Commonwealth Games, but they can take heart in the fact that a number of countries in the past had also faced similar criticism while hosting such mega sporting events.

The very nations, including Scotland, which criticised Delhi for not being fully geared up to host the Games, have faced the same music over various reasons ranging from poor transport facilities to delay in preparations to financial irregularities and even political boycotts.

Most recently, during the 2010 Football World Cup in South Africa, FIFA officials expressed concern over the timely building of the stadiums. There were also apprehensions over security, sales of tickets and transport. But the fears gradually vanished with the progress of the tournament and timely actions by organisers helped make the event a grand success.

In February this year, the Winter Olympics in Vancouver, Canada, faced criticism regarding preparations -- similar to that of Delhi. There were reports that transport links were not working just two days before the event and there were too much ice in some venues while it was too less in other venues.

Moreover, the death of a Georgian athlete further added to the woes of the host country but Canadian authorities managed to overcome the initial hiccups and the Games ended successfully.

During Beijing Olympics in 2008, poor air quality in the Chinese capital created a buzz in the international media. It forced International Olympic Committee (IOC) President Jacques Rogge to even suggest cancellation of some events. But despite the hiccups China came up with an excellent Olympics.

In 2004 Athens Olympics, delay in completion of infrastructure projects, including tram and road links, drew severe flak for the organising committee, which had to be replaced just before the event. The haste, in which the infrastructure was completed, also resulted in the death of several labourers, bringing in more shame for the country.

The 2000 Sydney Olympics was also not free from controversy. The organisers were criticised for developing the Olympic Park, which housed the athletes, without proper planning as reaching it was cumbersome and time-taking.

During Atlanta Olympics in 1996, the city faced worldwide vilification for its poor transport facilities which prompted the international media to say the city was in "complete chaos". With most projects remained uncompleted, the city failed to get a boost in tourism and employment as expected.

When it comes to hosting Commonwealth Games, the Games organised by Edinburg, Scotland, in 1986 are remembered due to political boycott and financial mismanagement.

Britain's attitude towards South Africa during the Games sparked a huge political row and forced most of the African, Asian and Caribbean countries to stay away from the games. It was reduced to an all-white event as 33 out of 59 Commonwealth nations boycotted it. It also suffered a serious financial setback as it opened with a deficit of 3 million pounds, which grew to 4.3 million pounds.

In 1954, the Commonwealth Games in Vancouver had also faced similar financial problems. And the situation was so severe that then chairman of the British Empire Games Committee V Stanley Smith said he would have to "beg, borrow or steal" to hold the Games.

As the international media lambasted the organising committee for the mess, Smith had reportedly said there was bound to be some "orderly disorder when we have over 1,000 athletes, managers and newspapermen suddenly descend on us" --a statement echoes similar to the remarks of Delhi CM Sheila Dikshit that "these minor glitches and hitches do come around" while organising such a mega sporting event.

Reacting to mounting attack over preparations for the Commonwealth Games, particularly after collapse of a foot overbridge near the main venue earlier this month, Dikshit had said: "There will be some problems. There are some problems. But they are not insurmountable. If there is any concern or there is any problem, they will be addressed to."

Delhi has faced criticism from various participating nations for its unhealthy living conditions at the Games village, although the athletes have now started praising the standards of accommodation they were given there.

Promoted
Listen to the latest songs, only on JioSaavn.com
Like Delhi, organisers of the London Commonwealth Games in 1934 had also faced similar flak, especially from the Canadian contingent who openly expressed their unhappiness over the food and accommodation facilities. The athletes also reported that they were made to walk to the venue before formal training started.

However, the silver lining in all those events was that the organisers rose to the occasion, albeit late, and managed to host the events successfully -- a scenario which is also expected during the upcoming Delhi Games.
Comments
Commonwealth Games organisersSydney Olympics