"This is the 10th childbirth (including a case of twins) on an NDRF boat while evacuating expecting mothers from flood-hit areas since year 2013," a spokesperson said. 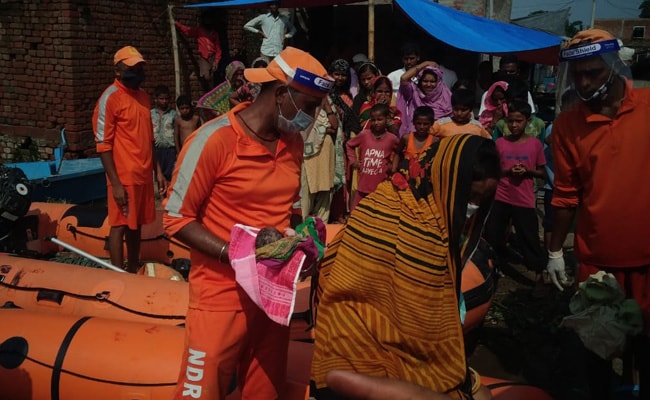 The rescue team was accompanied by an ASHA: NDRF spokesperson said

A 25-year-old woman gave birth to a baby girl on board an National Disaster Response Force (NDRF) rescue boat running on the swollen Burhi Gandak river in flood-affected Bihar on Sunday, officials said.

The woman was being rescued from her marooned house in Gobari village of East Champaran district when she developed severe labour pain and later delivered the baby around 1:40 pm, they said.

The NDRF team was accompanied by an ASHA (accredited social health activist) worker who helped in the childbirth, an NDRF spokesperson said in Delhi.

The rescuers from the 9th battalion of the NDRF were attending to a drowning incident in the vicinity when they were informed about the pregnant woman whose village was hit by floodwaters of the Budhi Gandak river, the spokesperson said.

"The mother and the newborn girl have been shifted to a public health facility in Banjariya village of Motihari district by an ambulance and their condition is stated to be stable," he said.

The spokesperson said NDRF personnel are trained in medical first responder course and all rescuers are taught handling of childbirth during an emergency.

"This is the 10th childbirth (including a case of twins) on an NDRF boat while evacuating expecting mothers from flood-hit areas since year 2013," the spokesperson said.

A total of 21 NDRF teams are deployed in a dozen districts of Bihar for conducting flood rescue and relief work.