Men, women and even children are forced to cross the stream using the parallel ropes as it is the only way they can reach their farms and start their work for the day. 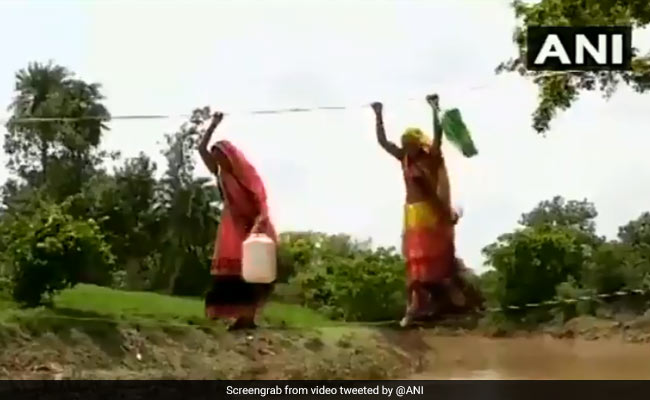 Heavy rains in monsoon have only added to the problem.

Residents of Sonkach Tehsil in Madhya Pradesh's Dewas face danger on a daily basis as they are forced to use a makeshift bridge - made of ropes - to reach their farms for work.

Men, women and even children are forced to cross the stream using the parallel ropes as it is the only way they can reach their farms and start their work for the day.

According to them, the water level of the river stream has risen ever since a dam was constructed in a nearby area. Heavy rains in monsoon have only added to the problem.

The stream goes on to join Kalisindh, the area's largest river.

#WATCH: Villagers in Sonkach Tehsheel of Dewas risk their lives to cross a river in the area. The villagers balance themselves with the help of two ropes tied across the river. #MadhyaPradeshpic.twitter.com/wztJDRb2M5

Ram Singh, a villager, said, "The ropes are the only way through which we can go to work, fetch food items and other articles. Those who cannot swim are not allowed to cross the stream at night."

There have also been incidents of people falling into the stream while crossing it. Ram Singh said he once injured his shoulder after falling off the ropes at night.

"Ever since the dam has been constructed, the water level has risen. Earlier, anybody could cross as the water barely touched our knees", said Sugandhbai, 60.

They claim to have written multiple complaints to their elected representatives, but to no avail.

Madhya Pradesh's Dewas constituency is represented by Public Works Department minister Sajjan Singh Verma. The Tehsildar of Sonkach GS Patel was present at the site, discussing the issue with the people. Upon being asked about what steps the administration is taking to address the situation he said, "We are surveying the area and after that we will determine our next course of action."

"We have also asked the gram panchayat for a proposal which will be forwarded to the district collector for further examination," he added.