After the high tide brought in more water into the city from the Arabian Sea, on video, a near six-feet-long shark could be seen on Mangaluru streets.

The shark was being brutally dragged along the road in Mangaluru

Mangaluru: Heavy rain for the last four days has thrown life out of gear in the port city of Mangaluru in Karnataka. There is knee-deep water in many parts of the city, and it is not just the residents who are seen wading through the water.

After the high tide brought in more water into the city from the Arabian Sea, on video, a near six-feet-long shark could be seen on Mangaluru streets. The video, shot by a passenger inside a Maruti Wagon R, shows a man brutally dragging the shark along the side of the road using a metal hook. The shark died.

In another video, a five-feet-long snake can be seen swimming in shallow water on a street in a residential area in the city. As the snake calmly swims by, three shocked by-standers can be seen waiting for it to pass at the gate of their house.

Forecasting rain or thundershowers over the next two days in the coastal districts and south interior areas due to favouring conditions, officials said fishermen have been advised not to venture into the Arabian Sea and tourists were told to stay away from beaches facing high tides. 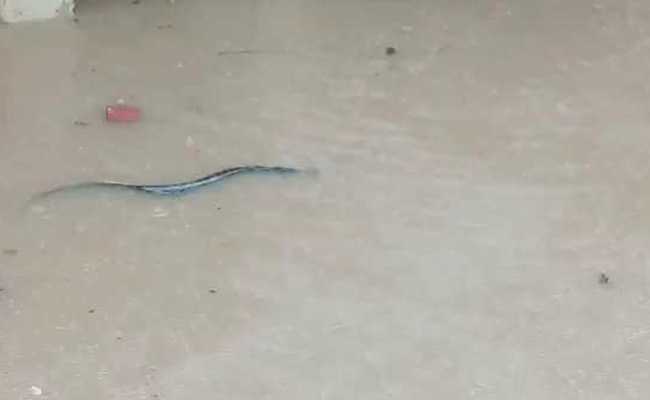 As heavy rain pounded Mangaluru, 375 kilometres from Bengaluru, and water started stagnating on the streets and entering buildings, some schoolchildren went home on orange inflatable boats escorted by disaster management volunteers in their bright yellow helmets on Tuesday. Shopkeepers downed their shutters amid the downpour. Many vehicles that tried to wade through the water got stuck; the drivers left them and walked on.

The heavy rain in the coast was due to well-marked low pressure over the south-east Arabian Sea, off the coast of Karnataka and north Kerala, and also due to the onset of monsoon in Kerala, the weather office has said.
Comments
Snake in MangaluruMangaluru shark on road