2 Crushed To Death As Underconstruction Bridge Falls In UP's Etah

The dramatic visual from the accident site showed a Mahindra Max pick up vehicle completely crushed beneath mammoth slabs of cement. 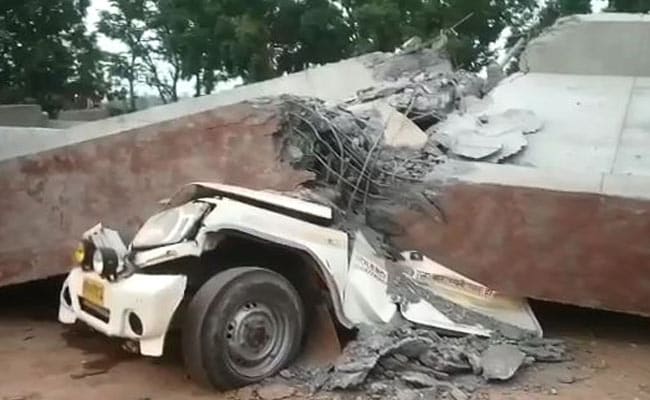 At least two people died and several others were injured in the accident.

At least two people died and several others were injured after an underconstruction flyover collapsed in Uttar Pradesh's Etah district.

The slabs of the bridge fell on a car underneath it, crushing two people to death, police said.

The dramatic visual from the accident site showed a Mahindra Max pick up vehicle completely crushed beneath mammoth slabs of cement.

A worker, who was present at the site, said that a number of people suffered injuries and a few vehicles were still trapped under the debris.

"I don't know what happened, it (flyover) fell suddenly. A car and a pick up vehicle are stuck under it (debris)," he said, adding that a number of labourers working on the bridge were also injured in the incident.

A police team was rushed to the spot and rescue operations are on, senior police official Prashant Kumar said.

"An accident took place under ps. Malawan Etah area on old GT Road at around 7PM today when four slabs of an under-construction overbridge fell on a Max Pic UP no. UP - 82 T- 1813," Mr Kumar said.

"On information, SSP and DM, alongwith police force reached on the spot, and after rescue work, two men of the Max Pickup found dead. Both bodies (have been) sent to mortuary for postmortem," he added.

The widening work from Aligarh to Kanpur on old GT Road is in progress since last two years, he said further.

107 Dengue Cases In Bhopal District So Far This Year, No Deaths: Report