Prime Minister Narendra Modi is in Chennai to inaugurate DefExpo, the prestigious exhibition that seeks to project India as one of the major defence manufacturing hubs. The protests over Cauvery waters is being led by political parties and fringe groups.

It was a roadshow of a different kind that awaited Prime Minister Narendra Modi in Chennai this morning. As the police tightened security in and around the Chennai airport, a solid mass of protesters, armed with black flags and black balloons, lined Anna Salai - the approach road. The show of protest forced the Prime Minister to stay off roads, and depend on a chopper instead to go about his engagements. The message "Go Back Modi", inscribed on the flags, soon became the number one international trend on social media.

The Prime Minister is in Chennai to inaugurate DefExpo, the prestigious exhibition that seeks to project India as one of the major defence manufacturing hubs. But to get to Thiruvidanthai on the outskirts of Chennai, he took a chopper straight from the airport. The aircraft is on stand-by to take him to the IIT Madras campus, where he is expected to attend a programme at the adjoining Adyar Cancer Institute later in the day.

The opposition DMK and fringe groups had hit the streets since morning, expressing anger against what they call the Centre's failure to form a Cauvery Water Management Board. A number of film personalities and politicians led the protests. 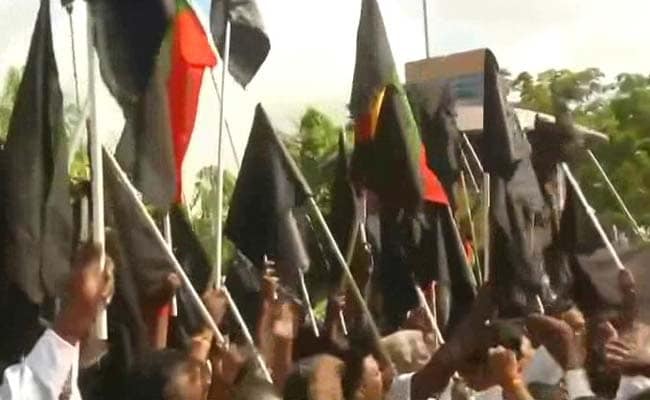 DMK leader MK Stalin, who was leading the party cadres, tweeted the photographs.The tweet read: "As you fly see the black flags reflecting our sentiments. People are hoisting black flags at homes . Wake up at least now. Withdraw the SC petition, otherwise the fire  of black will not be extinguished".

Later, the police detained nearly 200 protesters, which included a group led by veteran film director Bharathiraja. The group, where directors Vetrimaran and Ameer were present, held protests inside the Chennai airport. MDMK Chief Vaiko led the protests near Little Mount in Chennai.

The protest, though, was largely symbolic, since the Prime Minister's travel plans were changed on the eve of his visit in view of the situation. All road routes were cut out and a wall between the IIT Madras and the Adyar cancer institute was razed to enable the PM to travel through the walled and gated campus premises. MDMK chief Vaiko called PM Modi a "coward" for taking a chopper instead of staying on the road.

Protests over the Cauvery water management board has already derailed six IPL cricket matches that were to be played in Chennai. After mammoth protests on Tuesday ahead of a game, all the home matches of Chennai Super Kings were shifted to Pune. Announcing the decision late last evening, IPL Chairman Rajv Shukla said the police have expressed inability "to provide security in the prevailing situation". 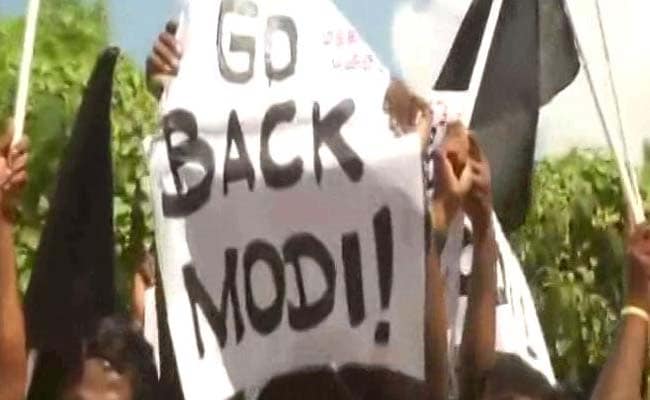 PM Narendra Modi was in Chennai to inaugurate the defence equipment exhibition DefExpo.

Public anger over Cauvery waters had peaked since March 29, as the Centre failed to draw up a neutral body to oversee the sharing of Cauvery waters between Tamil Nadu and Karnataka as directed by the Supreme Court.

Promoted
Listen to the latest songs, only on JioSaavn.com
In February, the Court had laid down a water sharing formula and gave a deadline to the Centre to form the body that would be in charge of implementing the process.

As the deadline expired, the Centre went to the top court, asking for clarifications on the structure of the body. Cutting across party lines, political leaders in Tamil Nadu have accused the BJP of trying to score political points in Karnataka, where assembly elections will be held in May.