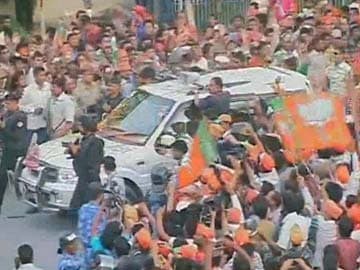 Crowds throng the streets as Narendra Modi arrives in Varanasi for the roadshow.

Varanasi: Narendra Modi's motorcade is inching its way through Varanasi thronged by massive crowds that have lined the entire four km route to the BJP office. This is the BJP's response to its prime ministerial candidate being denied permission to hold a rally in the city on his last visit before Varanasi votes.