If Home Minister is not sacked, we'll take battle to Parliament: BJP 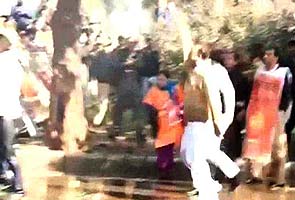 New Delhi: The BJP took to the streets in many cities today, threatening to carry its protest against Home Minister Sushil Kumar Shinde for his "Hindu terror" comment, to Parliament. The party wants the minister sacked and an apology from UPA chairperson Sonia Gandhi and Prime Minister Manmohan Singh. Two of the Congress' important partners too say Mr Shinde was in the wrong - BSP chief Mayawati has said the minister "acted in haste"; Sharad Pawar's NCP has said he should not have used the term "Hindu terror."