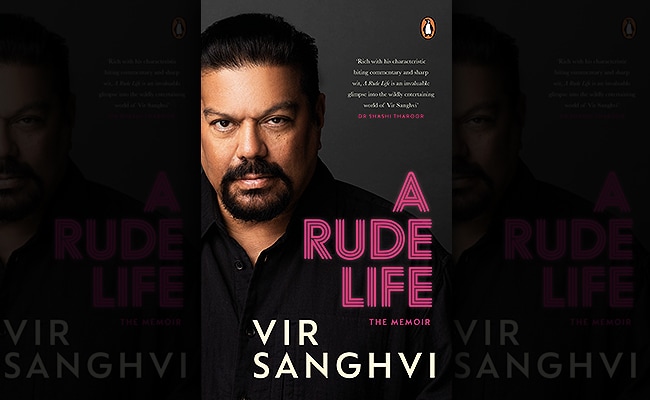 Cover of Vir Sanghvi's book 'A Rude Life: The Memoir'

I asked Mani in January 1987, shortly after I had joined ABP, if he could arrange for me to meet Rajiv. It took Mani only a month to deliver. Rajiv was travelling to Mizoram and Arunachal Pradesh, he said.

I explained that I was not keen on being stuck at the back of the aircraft with no access to the PM only to say that I had been on his plane.

No, said Mani. Domestic trips were different. When Rajiv went abroad, an Air India plane was reconfigured for him. But for domestic trips he used one of two Boeing 737s maintained by the Air Force for the use of the president, vice president and prime minister. These did not usually accommodate a press party and he could promise me half an hour with Rajiv on the Delhi-Aizawl sector.

I jumped at the opportunity.

In many ways, this was my first taste of the prime ministerial lifestyle. You drove to a separate terminal at Delhi airport (also managed by the IAF), were taken by the back door into a specially configured 737 that had a small area with normal seating, a larger area with eight seats that were laid out (like European train seats, I guess) facing each other with large tables.

The SPG and others sat in the normal seating area, ministers and senior members of the PMO sat in the comfortable area and there were three other areas at the front of the plane: a small space where V. George, Rajiv's personal secretary sat at his desk, a cabin that served as a sort of living room for the PM and a cabin beyond (which I did not see) which had a bed and more seating.

The attendants boarded first, then the ministers and officials (all from the back) and we pressed our noses against the plane's windows to see the prime minister's motorcade drive directly to the steps at the front of the aircraft. Rajiv, his wife, Sonia, and his young daughter, Priyanka, went up the stairs and then disappeared from our view.

As soon as the PM boarded, the doors closed, the plane began to move and we took off almost instantly. The seat belt sign went off in ten minutes and George came to tell Mani that Rajiv wanted him.

Mani vanished into what I assumed was the PM's cabin, returned a few minutes later and said that Rajiv would see me. At that stage, I had been a journalist (in one form or another) for over a decade, much of that period as an editor and had never felt nervous or intimidated by the thought of meeting anyone.

But this time I was nervous. It wasn't just that I was meeting the prime minister of India one-on-one. It was also that the whole special plane-special terminal thing had, frankly, intimidated me.

As I was ushered into his cabin, I saw that Rajiv was taking photographs from the plane's window. I guess he must have noticed that I was nervous because he made a conscious effort to put me at ease. He asked if I had been to Arunachal before. I said I hadn't. He said that it was very beautiful and that he had tried to persuade his son Rahul to come along but that Rahul had backed out at the last moment saying that he needed to study.

As I had no small talk to offer, I asked if he was keen on photography. Yes, he said. But it often depended on the camera. He described his camera to me and then told an anecdote about his visit to Japan. Apparently, the prime minister of Japan (I think it was Nakasone) had asked him about the latest Nikon camera and Rajiv had torn into it, saying that it was no improvement on its predecessor and that Nikon should have known better than to do such a shoddy job when expectations were so high.

'And you know,' Rajiv continued, 'I kept thinking that there was something wrong because his face kept getting smaller and smaller and then he stopped talking about cameras entirely. It was only after we boarded the plane and I opened the gift he had given me that I realized that it was exactly the same Nikon camera that I had been critical of!'

I have met nearly every prime minister since then but never have I met one who, realizing that a journo was overawed, made so much small talk to put him at ease.

The fun part of the conversation lasted ten minutes and, conscious that I was using up my time without getting anything of consequence out of the prime minister, I switched to politics.

Could Rajiv explain why the Congress was not doing as well in state by-elections given that only two years before he had won the largest mandate in Indian history?

He was frank. 'I have realized that crowds mean nothing. I campaigned in those states, and my rallies were so well-attended that we thought we would do well. But I think people only came to see me. They were curious and may be in some places I was personally popular. But at state elections, people vote on state issues. Just because they come to your rallies, it doesn't mean anything.' We did ten minutes of this sort of stuff before I decided to push my luck.

I told him that Giani Zail Singh felt that he was being denied the respect that should be accorded to the President of India. I expected Rajiv to give discreet denials and to move on. But no, he went for it.

'Respect for the president? Hah, did you see the statements he made when he became president?'

I said I imagined he was talking about the Giani's famous remark that he had become president only because his leader had told him to take the job. 'If Indiraji had told me to take a jhadhu and sweep the floor, I would have done that too,' Zail Singh was quoted as saying.

'And he talks about respect for the office,' Rajiv said disgustedly. 'He wants only one thing. He wants a second term which we are not going to give him. He is creating all these problems so we will back down and give him another term.'

And why wouldn't the Congress give him another term? 'Do you know what kind of role he played during the Punjab crisis? We have documents, written in my mother's own handwriting, in which she recorded how much Zail Singh sabotaged any attempt at peace in Punjab. And he did this while sitting in Rashtrapati Bhavan. Punjab leaders would come to Delhi and we would work out a settlement. Then, when they went back, they would get a call from Zail Singh saying 'don't agree, the government will give you more"!' (This allegation had been leveled against Zail Singh before but never - as far as I knew - by the prime minister of India.)

'My mother stopped sending him any papers related to Punjab and we have also refused to send them to him. That's why he is so frustrated. He wants to sit in Rashtrapati Bhavan and play Punjab politics.'

I said that Zail Singh had pointed to specific slights. He had said that Rajiv had broken the convention that a prime minister discusses the outcomes of his foreign trips with the president.

'Foreign trips!' Rajiv was incredulous. 'The man is an embarrassment. Everywhere he goes, he creates chaos. He went to Bangladesh and told them that he would like to mediate between Khaleda Zia and Haseena. They were so startled that they called us to ask if we wanted to interfere in their internal affairs. We had to scramble and say things like "he is a well-meaning person who was only trying to help. This is not India's policy or intention". Nobody in the MEA sleeps at night when Gianiji is abroad because you don't know what he will say or do.'

There was much more in a similar vein. Yes, said Rajiv, he was stuck with Zail Singh because his mother made a mistake in appointing him. He had done his best, he added, to keep up a good relationship with him.

He spoke about an assassination attempt on Zail Singh and him at Rajghat, a couple of months before our conversation.

'We were walking out together when I realized that we were being shot at. Gianiji turned to me and said "what's that?" I told him "someone is shooting at us. That was the first shot." But the prime minister and President of India can't start running away during a formal function (it was Gandhi Jayanti) so just keep walking. Poor old Gianiji, he was so frightened. But he kept his nerve and neither of us ducked,' Rajiv laughed.

In his view, if Zail Singh served out the rest of his term peacefully, the government would give him even more respect than he deserved. 'But he just keeps playing politics. First Punjab politics and then national politics!' Rajiv was still talking when the plan began to descend. I was sent back to my seat. 'I told you this was an off-the-record conversation,' Mani hissed at me.

Published with permission of Penguin from 'A Rude Life: The Memoir' by Vir Sanghvi. Order your copy here.