Crank It Up To 4G, George Fernandes Told Me In The MiG

January 29, 2019 will go down in Indian political history as a sad day. We have lost a true leader who stood for his values and shunned publicity and the limelight. And just as he would have wanted, he faded away into eternity quietly, leaving behind his legacy for those who knew him and understood him for what he was. Shri George Fernandes may have had a chequered political career and his share of enemies, but he left an indelible impression on those whose lives he touched. I was among those in this country of teeming millions.

It all started with the infamous and wholly unjustified tirade against the MiG-21 with inappropriate sobriquets such as "flying coffin", "widow-maker" and so on. As the Defence Minister in that era, he took it upon himself to prove to the nation that it was as safe as any other fighter in the skies and announced that he would like to fly a sortie in a MiG-21. That set the ball rolling and for various reasons, 3 Sqn, then based in Ambala, was the chosen unit to fly the minister. Serendipitously, I happened to be the Commanding Officer of the squadron at the time and the task was assigned to me. The then Air Officer Commanding (AOC) of the Ambala Air Base, Air Commodore SK Sofat, surprised me with a phone call, telling me to prepare for the "mission" and work out a sortie profile. We did get inputs from the minister's OSD that he wanted to understand what G-forces felt like. For the uninitiated, G-forces are what pilots and astronauts feel when their craft is maneuvering and the apparent weight of the body increases. For instance, in a 2-G maneuver, the body feels twice as heavy with attendant stresses on the human physiology. Fighter pilots are trained and equipped to deal with these forces and can withstand higher G-loads. However, all pilots tend to black out beyond a threshold G level. A sortie profile was hence drawn up for the minister, in which the plan was to progressively subject him to incremental G forces till 4Gs. And as is customary, a two-seater MiG-21 called the MiG-21 UM or the Type-69B was prepared for the VIP's flight with a thorough wash and a makeover.

On schedule, the minster's HS-748 "Avro" touched down at the Ambala Air Base just before dusk on July 31, 2003. I was part of the entourage lined up to receive him. At the assigned DOT (Door Opening Time), the minister stepped out in his trademark khadi kurta and pyjama and greeted each of us. The shiny VIP Ambassador rolled up to welcome him but the sprightly gentleman first wanted to get a sense of where he was and walked a few steps away to get a 360-degree view of the Air Base. His sharp eyes immediately caught sight of an ancient relic about 2 km away, a bridge from Sher Shah Suri's time located just adjacent to the Air Traffic Control tower and preserved for posterity by the Air Force Station. On being told about it, he wished to take a closer look. Much to everyone's surprise, he politely declined to use the Ambassador and briskly began marching towards the bridge, the entire entourage in tow! That was my first experience of the simple, down-to-earth and no-nonsense person that he was.

A 'quiet dinner' was planned for him that evening with a few selected officers and in attendance. I was again touched by his simplicity when he politely refused the delectable fare prepared for the occasion, choosing instead to dine on just "dal and chawal". But that paled in comparison with what we experienced as we bade him goodnight at the VIP room. No sooner had we started walking away when he opened the door and complained that there wasn't a "Rin" soap in the bathroom for him to wash his laundry! The machinery of the Air Force Base was promptly put in motion to procure a cake of the detergent for the minister's use. The next morning, the minister arrived at the squadron exactly at the appointed briefing time of 6 am. The then Air Officer Commanding of the Western Air Command, Air Marshal AR "Adi" Ghandhi had also fetched up at Ambala for the occasion. I commenced my sortie brief with the customary salutation to the dignitary. While elucidating upon the various maneuvers, I described how I would gradually expose him to incremental G forces, culminating in a 4G maneuver. The AOC-in-C was visibly uncomfortable with this and suggested that we restrict ourselves to 2.5 G, considering the minister's age (73 years!). In his typically calm and composed manner, the minister interjected and said "Air Marshal, I would like to experience 4G if you don't mind", and that sealed it. 4G it would be. 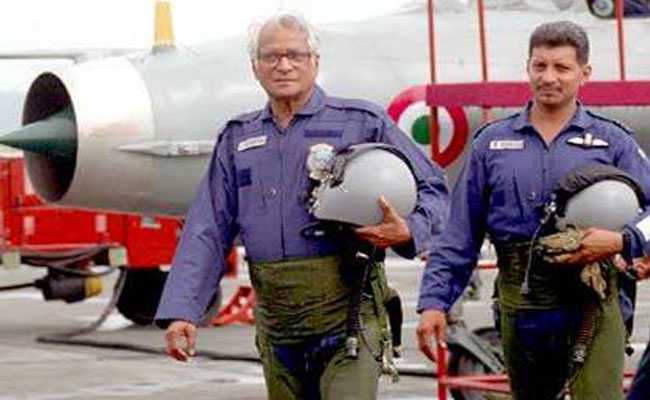 The minister swapped his kurta-pyjama for a blue and olive green anti-G suit and immediately looked all set to leap into the skies, which by then had turned a murky grey with an unseasonal drizzle. He was given a "puke bag" just in case, and was explained its use. All fighter squadrons are equipped with a "Tea Club" to provide the much needed nutrition for pilots, especially before a sortie. Platters of sandwiches, samosas and biscuits were presented to minister which, not unsurprisingly, were politely refused. He opted instead for a banana. This wasn't in sync with the scheme of things and there was panic all over since the Tea Club hadn't catered for such a request. Yet again, the machinery of Air Force Station, Ambala, was put into motion. All key personnel carried a "walkie-talkie" for speedy communication and each had a call sign to confuse snoopers. Hence, the AOC was "Tiger" and other officials had call signs such as "Panther", "Lion", "Jaguar" "Cobra" etc. With the result that these fierce predators of the jungle were running helter-skelter that drizzly morning in Ambala to procure a certain fruit in quick time. I think it was Panther's wife who came to the rescue and dispatched the fruit to the squadron! By then, the weather had deteriorated and the minister had the time to chat with the squadron's pilots in the crew room. He attentively listed to even the junior-most of pilots and gave us a wonderful pep talk. He finished by castigating his detractors who had concocted a "scam" where none existed in connection with the coffin issue. He explained to us that his only intention was that martyred soldiers must be transported to their final resting place with honour and dignity, and not in crate-wood makeshift coffins.

The weather finally lifted and we proceeded to the aircraft. The minister made it a point to greet and shake hands with every one of the technicians lined up to see us off. As I helped him strap into the cramped confines of the MiG-21's rear cockpit, he quizzed me on various dials and instruments. We were soon ready to start our engine and taxied out to the runway. As I engaged the afterburner, the MiG hurtled down the runway and was airborne in under 20 seconds. I levelled the aircraft below the cloud layer to familiarize the minister with the terrain and various cultural features. He was most interested when I pointed out the town of Kurukshetra to him and wanted a closer look. I hence carried out an orbit around the town and then proceeded to our maneuvering area, all the while talking him through the sortie. We then commenced our briefed sortie profile, with me inquiring every now and then if he was comfortable.  Not once did he complain of any discomfort and was soon ready for the high G maneuvers. As I cranked up the Gs progressively to 4G, he was alert and composed and responded to every call of mine. For a 73-year-old, this was absolutely amazing. Upon completion of the profile, I asked him if he was ready to head back to base. I was overawed when he asked if we had the fuel for a few more maneuvers! We spent a few more minutes in the area and then headed back to Ambala for an uneventful landing.

At the press conference after this, the minister fondly recounted his sortie and described to the eager media what if felt like to fly in a fighter. All the while, he complimented me on a "copy-book" sortie and seemed reluctant to hog the limelight. After a quick change back into his traditional attire, he departed for Delhi, but not before profusely thanking all of us at Ambala. For me, this would go down as one of my most memorable sorties in the IAF and also one of my most cherished interactions with a wonderful human being and a true leader who cared for the men and women in the field. It is indeed with a heavy heart that I pen these words and pray that Shri George Fernades' soul rest in eternal peace. Jai Hind!