Kheadaha in Sonarpur was woken out of its reverie with news that its municipal school was to play host to one of India's biggest celebrities.

The school itself has a fascinating story to tell thanks to its visionary Principal. It is not just a seat of education in the small village, but a model for many institutions across India that has transformed many a life. Kheadaha High School is part of NDTV's Support My School campaign, an effort to revitalise dysfunctional schools, in far flung areas across the country.

So on this April day, the NDTV crew travelled to Kheadaha to see how a little help from us has made the school better and the smiles brighter.

There was  buzz around meeting a personality the parents and children had only seen on TV. A lucky few had made it to the Eden Gardens to see India's favourite 'Dada' in person.

A blue BMW rolled into Kheadaha High School a few minutes past ten, and Sourav Ganguly made his way to the grounds.

I couldn't tell who was more excited - the 700-odd crowd or Sourav himself.

Having Dada at their school was indeed a dream come true. And an affable Sourav Ganguly enjoyed every bit of the adulation, signing autographs and shaking hands. Dada effortlessly reached out to the students and heard what the students had to say.

Sourav was taken in by the campaign's idea of giving a shot in the arm to rural education. As he ambled on, he was impressed by the row of bicycles. 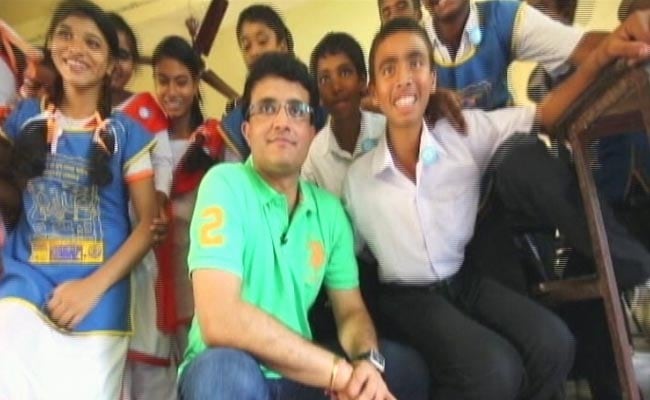 "You see this is the reason you will find kids here naturally fit. They do not have a paunch, unlike city kids. They cycle for kilometres to come to school, unlike us who cycle to stay fit. This is real Bengal. Ashok Dinda, who plays for Bengal comes from Midnapore and is naturally fit," he noted.

"We have studied in some of the best schools of the city like St Xaviers, La Martiniere and Calcutta Boys but to come here and support this project is amazing. I am not saying have a great life, but all I appeal is, have a healthy life."

This is exactly what the project aims for- health through better sanitation, clean drinking water and hygienic surroundings. By lifting the standards of health and sanitation, Kheadaha High School has managed to get girls back to school.

The school's transformation began in 2005 when the new principal was appointed. Altup Sekh, a dynamic man in his fifties saw an opportunity to script a turnaround. And so he did. The school, which had two rooms with temporary shades now has three buildings and several class rooms. It has 1489 students - 361 from the tribal community.

The biggest achievement for Mr Sekh was to be able to stem the rate of drop-outs. He is a good captain who has built a good team, just like Dada, ten years ago. Today, Kheadaha High School has basics like toilets, electricity and mid-day meals.

Democracy works here (our netas could learn from them). To engage the kids in maintaining high standards, Mr Sekh came up with an unique idea - the school captain has been replaced with a Prime Minister who works with a cabinet.

Indrani Mondal, a class IX student is the Prime Minister of the school. She has a Sports Minister, a Food Minister, a Health Minister, an Education Minister working under her.

Indrani says the there are many benefits to such system. She says, "There is a sense of ownership and accountability. The students do not have to be told about their duties and responsibilities any more. The Health Minister makes sure that the hygiene standards are maintained. People are looked after well. Everyone has his or her own duties."

"We have anti-virus water filters in the school now. It is the cabinet's responsibility to see it function properly. We take Rs.1 from everyone to keep the toilets clean. It may not be big money but it is a commitment towards cleanliness," she added.

Mr Sekh's organisation skills have got the school many awards, including one at a State Level Competition this year. The principal says that empowering children, making future leaders is a part of the mass literacy mission.

Sourav Ganguly was blown over by the cabinet and their functions, and so were we.

Dada rcealled," When I went to school, there were houses and I was a part of Brito in St. Xaviers. But this is truly amazing. I am impressed by Indrani's confidence, clarity of thought. This is how one builds leaders. She is uninhibited and that will be a huge bonus when she goes out and takes on the world outside. The school is wonderfully preparing her to do so."

Sourav Ganguly's knowledge of blooding young guns and spinning success stories out of them is much sough after. But even Dada admitted that he would like to borrow a thing or two from Altup Sekh's manual.

Mr Sekh's ideas are bearing fruit. They have triggered a domino effect where each student is inspiring others to join the school.  Every child is becoming the torchbearer of education for their neighbourhood.  And perhaps the biggest achievement is to get the girls back to school and motivate them to finish their school education.

And what better way to sign off than a game of cricket!

The Prince of Calcutta may have been away from the 22 yards for a while, his powers on the off side may have waned, but the charm, the passion and the spirit of competition continue to define Dada. Something Mr Sekh and his wards won't forget in a hurry.

Disclaimer: The opinions expressed within this article are the personal opinions of the author. The facts and opinions appearing in the article do not reflect the views of NDTV and NDTV does not assume any responsibility or liability for the same.
Comments
Sourav GangulyIndian cricketBCCIIndian cricket teamTeam India