In Chef, fans will get to see shades of Saif Ali Khan they missed all these years

Mumbai: Did you just ask - isn't Saif Ali Khan reason enough? That might be so but here are a few others. Chef, a remake of Jon Favreau's star-studded Hollywood hit of the same name, is this week's big Bollywood release. Saif is cast as the divorced chef who takes his son on the road with him in order to connect. A food truck takes them on a journey of discovery - they find not only great food but also each other. Here's why you should not miss Saif Ali Khan in Chef.

1) Saif Cooks Up A Delight

Chef is an out-an-out Saif Ali Khan film. His fans have loved him in films like Dil Chahta Hai (2001), Kal Ho Na Ho (2003), Parineeta (2005) and Omkara (2006) after which he occasionally delivered an impressive performance along with many duds. In Chef, they will get to see shades of Saif they missed all these years. The actor learned cooking to play the role with conviction, and it shows every time he is in the kitchen. Talking about preparing for the role, Saif told me, "Cooking is like magic, with a little bit of this and a little bit of that. With all completely different ingredients, you prepare one mouth-watering dish." The fact that he believes in the art of cooking reflects on the big screen.

What clicked with the audience in Dil Chahta Hai and Kal Ho Na Ho about Saif's character were his poker face expressions and his comic timing. In Chef, there are many hilarious moments, which will leave the audiences in splits. What's important is that he is not trying to be funny in any of those scenes. It's his casual talk with perfect timing, which director Raja Krishna Menon has used very well.

It's not easy to make people laugh that's the reason filmmakers and actors always say that comedy is the toughest genre. When writing funny lines for actors like Saif Ali Khan who is good with good jokes, one has to think of smart lines. In Chef, when Saif Ali Khan is in Goa with his friend and his son, as a passing mention, he tells them about an incident that happened to him 20 years ago when he visited Goa with his two friends. He was mugged! Please don't make me spell it out for you!

As much as the lead actors may perform it's the supporting cast that keeps the narrative going on the big screen. Every actor in Chef performs brilliantly, which only means that Raja Krishna Menon didn't just keep his focus on his main lead. Padmapriya Janakiraman, who plays Saif's ex-wife, is outstanding. Terrific actors like Dinesh Prabhakar, Chandan Roy Sanyal and Sobhita Dhulipala bring a lot to the Chef's table. Singer Raghu Dixit who makes an appearance in a song is placed well and is there for a reason. Each of them has important roles to play. Chef works because of its significant supporting cast. 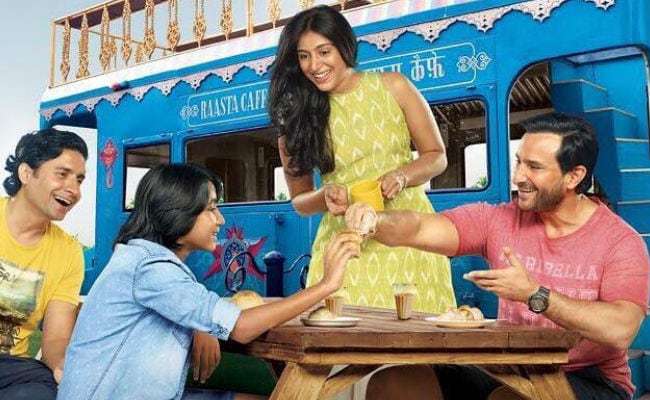 Good food is not bound by geography - that's the reason an article, recipe videos, TV show or a film on food has no boundaries. Master Chef Australia is one of the most popular reality TV show across the world as the focus is always on preparing the best and the tastiest dish. Indians, as we know love food and the range of cuisines in India are worth a story. Chef may not talk about the delicacies that India offers, but when you watch Saif take his son to Delhi's Chandni Chowk to eat Chole Bature, you will wish you were right there biting into the hot and spicy street food of Delhi.

Promoted
Listen to the latest songs, only on JioSaavn.com
(Rohit Khilnani is a senior entertainment journalist based in Mumbai, he is also the author of the book I Hate Bollywood. Information about box-office collections and whereabouts of films stars is at the back of his hand. He starts and ends his day by taking his dog, for walks)

Disclaimer: The opinions expressed within this article are the personal opinions of the author. The facts and opinions appearing in the article do not reflect the views of NDTV and NDTV does not assume any responsibility or liability for the same.
Comments
saif ali khan chefchef filmchef 2017 film