Last Thursday, Rahul Gandhi held a press conference. Like millions of Indians, I did not watch it. In fact, I only got interested when three disparate friends, who do not know of each other's existence, sent me a cleverly-edited meme of Rahul's presser, that poked fun at the Wayanad MP's excessive use of the word 'strategic'. Evidently, my friends found it funny, and it confirmed their bias that Rahul indeed was a pappu.

So I went to the Congress party's YouTube channel and watched what Rahul had to say. He began with a 'strategic' statement that he didn't intend to criticize the government, but only to give constructive support and advice. The single-point message from Rahul Gandhi was that the lockdown is a necessary instrument, but it can only slowdown the coronavirus, it cannot stop it. To really defeat the virus, and "get ahead" of it, India needs to dramatically ramp up testing.

Government-friendly media outlets immediately started attacking Rahul Gandhi for saying the lockdown wasn't enough. Memes were created to ridicule him. Those who backed him were called 'lockdown cynics' despite the fact that Rahul had never questioned the validity of the lockdown. He said, right at the top, that the lockdown serves the purpose of giving authorities the "time and space" to put medical and economic systems in place, to build an "architecture" for a long-term battle against the coronavirus. 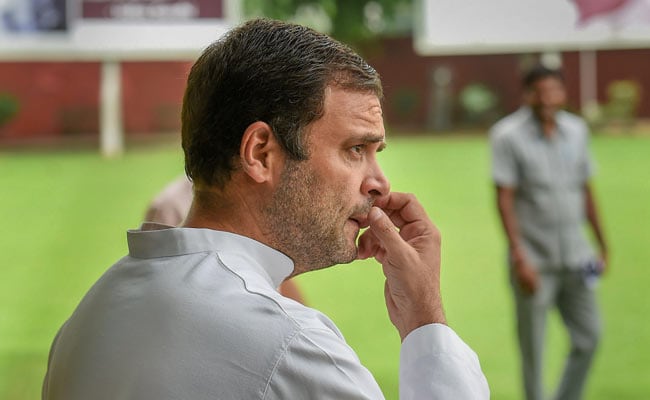 Responding to questions in an hour-long interaction, Rahul Gandhi said COVID-19 cannot be controlled; it has to be dynamically managed (File photo)

In fact, the rate at which Coronavirus cases have exploded over the past few days shows that Rahul got it absolutely right. Across the world, lockdowns are being increasingly recognised as 'blunt instruments' - a bazooka to kill a bee. To understand this, think of a family of five in a scenario where there is large-scale random testing. One family member tests positive, even before they begin to show symptoms of the disease. That person is quickly taken away from the home to isolation centres to minimize the chance of spreading it to other family members.

On the other hand, if testing is done only after they start showing classic COVID-19 symptoms and the entire family is quarantined together, chances are they will spread it to a majority of other family members as well. Studies show that the viral load is the highest, and a patient most infectious, in the first week of showing symptoms. The longer one delays  isolating a positive case, the more likely they are to spread it to close contacts. This is even more dangerous if asymptomatic spreaders get stuck in a house with other healthy family members. They do not qualify to be tested and they are in constant close contact with a small group of people in a closed environment.

In fact, disease data from across the world, including India, shows that the disease spreads the most easily amongst family members. Data from Beijing showed that 86 percent of positive cases caught the virus from family members. Beijing officials said in late March, that "the rate of transmission amongst family members was 17 percent, while the rate of transmission from contact with ill people in other social settings has been only 3 percent. Another study done in Guangzhou suggests that over 10 percent of 'household contacts' caught COVID-19 from patients in their family, making this group the most vulnerable.

Over 17,000 coronavirus cases, including 543 deaths, have been reported from across India

So if one person gets COVID-19 and then passes it on to others in the family, we will see a sudden multiplication in cases, within just a few days. This will continue till everyone in the family - or the full number of people in a household - gets infected. The curve will first appear to go up exponentially by the factor of average family size, and then flatten once the limit is reached. Testing only those who are ill or their close contacts will increase the sampling bias in this curve. That's because someone who has the symptoms probably will test positive, and since family members are the most susceptible group, they too, will show up as positive cases, even if they are asymptomatic.

Waiting for symptoms creates another kind of testing bias. Someone tests positive after they fall ill and authorities try to trace all their contacts in the previous 14-day incubation period. The contacts are tested and quarantined. Since the rate of transmission amongst non-household contacts is not that high, the chances are that very few of the contacts traced will test positive. While testing family members alone will make us think the disease is spreading faster than it really is, testing only contacts of positive cases could make us think the disease is under control.

That could well be the reason for the paradoxical disease data in India. Over the past four days, since Rahul Gandhi's press conference, the number of cases has gone up by 60 percent despite a strict lockdown. ICMR's testing data tells us that as of April 19, 3.83 lakh people had been tested for COVID-19 and 17,615 were found to have the virus. That's a positive rate of just 4.5 percent. In the US on the other hand, 19.8 percent of those tested had positive results. The WHO has reportedly said, that the rate of positive cases needs to be between 3 percent to 12 percent for lockdowns to be ended.

These paradoxical numbers - low positive rates on a very low testing rate shows that there is something wrong in our disease data. If the positive rate is so low, then there is no real logic behind extending the lockdown. Testing more and more people, whether they are showing symptoms or not, is the only way to take well-informed policy decisions of when and how to come out of the lockdown. Anything else will be like shooting in the dark and the social, economic and psychological costs of that could turn out to be too high for India to afford.