The Excruciating Loss Of My Mother In This Covid-Hit World

One evening in May, when the clouds had darkened the skies outside, my mother sat quietly in the room in our house which we had forcibly made hers after she fell seriously ill last winter. In that twilight, when the sun had set and the lamps had not yet been lit, she looked at me and said, "I won't get to donate my body any more. No one will take it in the middle of Covid." "Don't be silly," I told her, upset that she had seen the truth before its time. "Covid will be gone and forgotten before your time ends."

My mother was obsessed about donating her body. It began six years ago, right after she had a small stroke that made her left hand less dexterous. The doctors had implanted a machine right above her heart that was a defibrillator-cum-pacemaker. It was a mini-version of the kind you see in medical shows which shock hearts back into normal rhythm. The battery-powered foreign body that formed a small lump on her chest made her more conscious that natural bodies die.

She got hold of the phone number of an NGO which organised cadaver donations for organ transplants and for teaching anatomy in medical schools. Despite my protests, she coerced me into making contact and getting her registered. Perhaps this was her way of dealing with disbelief. Those who believe can take refuge in the afterlife. My mother probably sought meaning after death by ensuring that her body continued to have an active life even after she had left it behind.

Last week, she died. She had moved to my sister's home, and it had been exactly three months since I saw her in flesh and blood. Her doctors had told us that she wouldn't stand a chance against Covid and we had to ensure that she had no visitors. Not only did that mean that her family couldn't visit her but that even her regular blood tests had to be staggered over much longer intervals. Doctors had to be consulted only on the phone or via videocalls.

Video-calls were not new for my mother. After my father died, three years ago, till the last six months of her life, my mother lived alone. Independently. Every evening, my daughters dialled her landline and announced "Tell thamma (grandmother) to switch on her video-call." 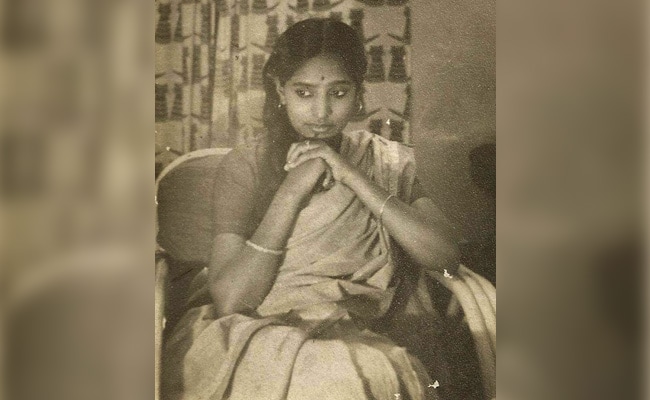 My mother when she was 25 (photograph taken by my father)

It was a daily ritual which had its own familiar notations. My mother would dress up for this ceremony - tie her hair in a bun and put on some lipstick. She wanted to look good for my daughters and, more importantly, look well. Each side announced what they had eaten or were going to eat for dinner. My daughters would inform her if they had kathak or piano practice. Sometimes they would show her their sketches and paintings. And it always ended with "shubho raatri" or good night.

Every now and then, I would ask her to show me her ankle or take the phone camera closer to her eyelids to check whether fluids had collected there. It was a constant battle that she had to fight as her weak heart meant her body wasn't able to flush out fluids without strong medicines. That in turn affected her kidneys and at times made her sodium levels drop sharply.

In normal times, every fortnight when we visited her for lunch, I would push my thumb into her ankles to see whether they were swollen. She would study my face closely to catch any fleeting sign of worry. And then she would say decisively, "I am fine, stop fussing. Your worrying will make me sick." This became a daily affair over the five months that she lived with me.

But the lockdown ended that. Even phone conversations became harder as she got increasingly breathless. Her voice became small and turned inward. She probably saved all the day's energy for the evening video-call with my daughters. She still tied her hair, put on a fresh layer of lipstick and applied kohl in her eyes. But the calls began to get shorter and her words began to get indistinct. From the other room, I could hear my daughters asking her to repeat what she had said. Often, she didn't have the strength to speak again.

One day, towards the end of July, she asked to see everyone's faces. She said "tomraa bhaalo theko" or "stay well" in Bengali to each one of us. That was the last time she showed her face. She told my sister ' I will call the kids when I am feeling better.' That day never came.

In the isolation of the lockdown, my mother slowly became disoriented. She could no longer get up from her bed and began to feel an inexplicable pain that shifted between different parts of her body. My sister finally decided to break social-distancing norms and got a physician to come and see my mother. He found nothing wrong with her, or at least nothing that was not already known.

When she was lucid, my mother had said she should not be taken to a hospital ever again. Over the last six years, she had suffered four long stints of hospitalization and she didn't want any more. My sister worked out a compromise by hiring a hospital bed, and getting an oxygenator that constantly pumped oxygen into her failing lungs. Despite my mother's protestations and the fear of exposing her to Covid in a hospital environment, my sisters and I began discussing the option of moving her if things turned for the worse.

Then, one morning, my sister said my mother was probably getting better. She had eaten a full banana for breakfast - the most that she had eaten in a long time. As I listened on the phone, my sister asked her whether she would be open to eating something for lunch as well. I thought I heard my mother's weak voice say yes. "If she has an appetite," I said to my sister, "then she is probably getting better."

Within minutes, my sister called me again. This time it was a video-call. My mother had collapsed suddenly and wasn't responding any more. By the time I made it to her home, the local doctor had already arrived. "She is gone," my sister said. Just like that, before I could reach to be by her side, or hold her hand while it still had life.

I made the call to the NGO which she had discovered. No, they needed a Covid-negative certificate to take her body. I made a few more phone calls to see if a test could be done even now to get a certificate. It was illegal, I was told. COVID-19 didn't kill her, but it killed her last wish.

So my mother was burnt on a pyre, surrounded by a couple of angry priests who were deeply annoyed and offended that we were not going to pray for her soul. For she didn't have one. She was a being made of just flesh and blood, who lived and loved. And who always remembered to say "shubhoraatri" to my two children. Good night, Ma. We are awake. Sleep your eternal sleep.