In 1967, after a humiliating defeat in the six-day war with Israel, Egyptian President Gamal Nasser went on television and announced his resignation. Millions poured into the streets of Cairo to demand he stay on. He did.

In 2022, after humiliating defeats in five states, the "we three" of the Congress offered to resign, and the Congress Working Committee declined to accept the resignations. The Gandhi triumvirate stayed on.

The difference is that one resigned and the other offered to resign. One had the support of millions, the other of a small cabal of hangers on. Viva le difference.

Frankly, what does it mean to "offer to resign"? Isn't it just a mere token of acceptance of some minor failure? Just a gratuitous gesture to placate people? A mere pretense of taking responsibility?

When people really feel that they are responsible, they just resign. They don't offer to resign. They just up and quit. Like Virat Kohli, who quit while he was ahead. Or like David Cameron, who lost the Brexit vote and quit as Prime Minister on the moral ground that he was for staying in the EU.

In the private sector people quit for failing to deliver; they don't go through this little dance of "I'll quit, I would like to resign, here is my offer of resignation". If you have failed, then stand up and walk the plank.

P. Chidambaram, who has become the public voice for the Congress party in these "resigned" times, summed up the situation perfectly when he said of Goa, in August 2021, that there were no Congress block committees and that he had to start from scratch and managed to put together 30 of the 40 in time for this election.

The Congress figured this out only in August 2021? What, pray, were they doing since 2017? By forming only 30 block committees, they conceded 10 seats (25% of Goa's total seats) without a ground force.

Compare this with what the BJP did in 2018 December, after they suffered defeats in three states they held; Rajasthan, Madhya Pradesh and Chhattisgarh. Prime Minister Narendra Modi and Home Minister Amit Shah put on their party hats and started campaigning in these very states. They didn't hang around waiting for the Election Commission to call the general election. They just focused on winning back people's support. They did that non-stop till May 2019 when they swept back to power, destroying the Congress, especially in these three states, where it was 61 MPs for the BJP and three (yes, THREE) for the Congress.

Ask yourself what the Congress did December 2018 onwards? The answer is, nothing much - until March 2019. Rahul Gandhi decided to go on a much-needed holiday. The Madhya Pradesh and Rajasthan units remained deeply divided between factions and having snagged the "gaddi", leaders seemed more inclined to enjoy the fruits of power than focus on the upcoming battle. In fact, the only battles they really had were internal.

If you thought that after the humiliation of 2019, they would push to win the next rounds, you are wrong. They failed in Haryana, they did badly in Maharashtra, they were blown away in Assam. The crowning defeat came not from the BJP but the Left Front in Kerala, which broke the hoodoo of the party in power not being re-elected, and won handsomely in the state where Rahul Gandhi is an MP. The Congress fought 93 seats and won just 21.

In between all these electoral losses the Congress allowed the Amit Shah to topple two of Congress's prized possessions, Madhya Pradesh and Karnataka.

Sonia Gandhi admitted that she allowed Captain Amarinder Singh to stay on too long as Chief Minister of Punjab. But none of the three has admitted the disaster that was Charanjit Singh Chani as Chief Minister and Navjot Sidhu as Punjab unit president. The endless bickering made sure that no one wanted the Congress back in the saddle.

The biggest bouquet of thorns must be reserved for Priyanka Gandhi. After promising to rebuild the Uttar Pradesh Congress, where P Chidambaram said the party had withered away, she decided that the party would, without any organisation on the ground, contest 399 seats. Even the loyal Chidambaram commented that this was against what the party had planned, and though he didn't say it, it was a monumental blunder. With 2 seats and 2.5% of the vote, the Congress lost its deposit in 387 seats it was contesting. Priyanka Gandhi achieved little besides a huge waste of time and resources.

It was not just the money - if Priyanka Gandhi had instead campaigned in Goa, Punjab, Manipur and Uttarakhand, she may have helped a few more Congressmen win. At least they may have looked like a force for the future.

Instead, you have a situation now where the Congress looks like it is dead in the water in Goa and Manipur, and has left open the door for AAP in Uttarakhand. Punjab make look more complicated, but probably isn't. The Akali Dal, being a panthic party, will recover and continue to play an important role there, though it may need the five years to get itself together. The Congress meanwhile, with no leadership, is unlikely to be anyone's choice. More importantly, the Punjab defeat has already opened the door for AAP in Himachal Pradesh where the BJP, by all accounts, is on a weak wicket.

Where does the Congress stand today? As Prashant Kishor has pointed out, it gets 20% of the national vote. Theoretically, it could come back and be a force again. But a close look at the big states shows where the problem lies: 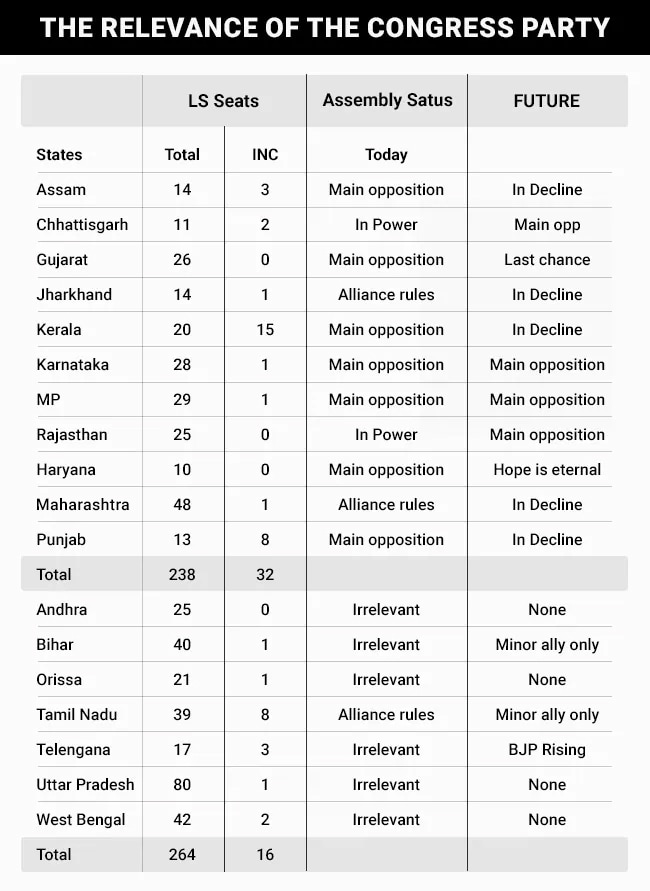 In states with 264 Lok Sabha seats, the Congress is irrelevant. Even in the states where it is the main opposition, do they have a realistic hope of winning more than single-digit seats?

The tragedy of the Congress under Sonia Gandhi has been that Congress offshoots are more relevant than the mothership. In West Bengal, Telangana and Andhra, it is the Trinamool, Telangana Rashtra Samiti and YSR Congress that are in power. Even in Maharashtra, NCP seems to have moved ahead of the Congress.

As if to make sure the Congress isn't going anywhere soon, a whole generation of younger Congressmen have been allowed to leave the party. So the Congress has little or no regional and local leadership in most states.

The day after the recent state election results, Modi was off to Gujarat for the first of many rallies in his home state, which will vote in November. What was the Congress's first family doing? Offering to resign.

As Oliver Cromwell said to the Rump of the English Parliament in 1653, "You have sat too long here for any good you have been doing. Depart, ... and let us have done with you. In the name of God, go."

Blog: In Ukraine, A Town In Hell, Landmines In Kindergarten Grounds