The cricket tournament with Sanskrit commentary was held for Vedic pandits in Bhopal to mark the birth anniversary of Maharishi Mahesh Yogi. 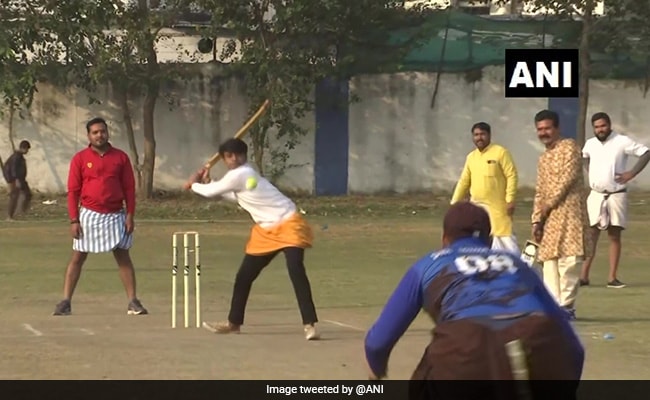 Bhopal: The players in the cricket tournament were honoured with Vedic books and a 100-year almanac.

Two men clad in traditional dhoti and kurta run as fast as they can while an excited commentator discusses the likely outcome of the ongoing game on the ground in fluent Sanskrit.

This setting might mislead one into believing that some ritual is underway but the two men are players trying to score a quick run during a cricket match.

Welcome to the cricket tournament being held for Vedic pandits on the Ankur ground in Bhopal to mark the birth anniversary of Maharishi Mahesh Yogi.

"Players in this tournament are those who perform rituals as per the Vedas," Sanskriti Bachao Manch's state president Chandrashekhar Tiwari told news agency PTI on Tuesday.

"This is the second year of this tournament in which participants, who are Vedic pandits, play while wearing traditional dhoti (or Mundu) and kurtas. They speak to each other in Sanskrit. The match commentary is also in Sanskrit," he said.

He said the goal of organising the four-day tournament is to promote the ancient Sanskrit language and sportsmanship among the Vedic family.

Apart from cash prizes for winning teams, players are being honoured with Vedic books and a 100-year panchang (almanac).

When asked about the challenges of playing cricket in traditional attire, Mr Tiwari said, "No problem is faced during fielding in the dhoti-kurta attire. I also hit sixes and fours during Monday's match".

He said teams from various Vedic institutions are participating in this tournament.

Mr Tiwari said that one such tournament with commentary in Sanskrit was played in Kashi.