Read inOther Languages
This Article is From Sep 15, 2019

A seven-year-old boy, who also studied and lived at the same Madrasa, was also found sleeping near the chained boy. 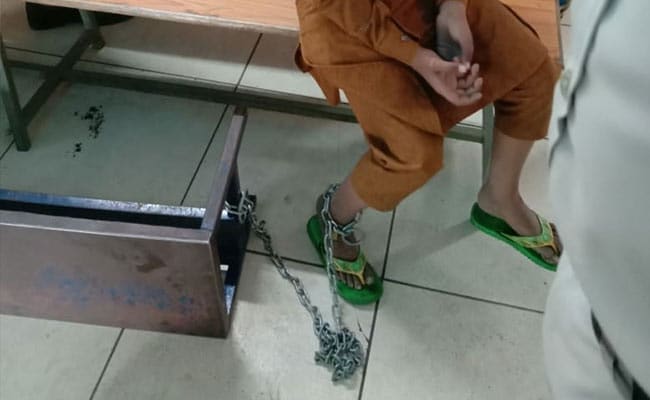 In a shocking case, a 10-year-old boy was found chained to a metallic bench in an unregistered Madrasa in Madhya Pradesh's Bhopal on Sunday morning. The boy lives and studies at the Madrasa.

A seven-year-old boy, who also studied and lived at the same Madrasa, was also found sleeping near the chained boy.

Local residents spotted the boy sleeping with one of his legs tied to a metal bench with an iron chain at 10 am this morning inside the Madrasa. A small lock dangled from the chain to stop the minor from free movement.

Residents alerted the police who subsequently used a gas cutter to free the boy. The Madrasa's manager has been arrested.

The Madrasa's manager claimed that the 10-year-old was chained with the consent of his parents as he often used to flee from there, police said.

"The manager has been arrested under provisions of the Juvenile Justice Act as well as Section 342 of IPC and will be produced before local court later in the day," the area's police station in-charge Umesh Yadav said.

Probe has revealed that the Madrasa was not registered with the State Madrasa Board, but was being run under a registered educational society, police sources said.

The two boys have been shifted to the Child Friendly Corner at city's TT Nagar Police Station and will be produced before the district Child Welfare Committee on Monday.